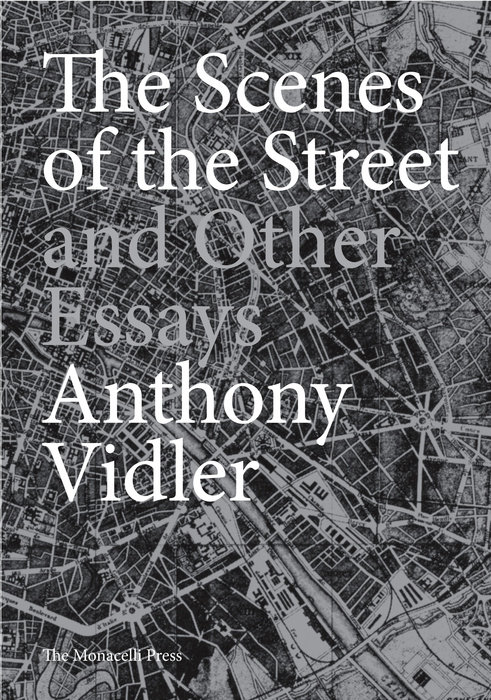 Share “The Scenes of the Street and Other Essays”

Anthony Vidler, dean of the Irwin S. Chanin School of Architecture of The Cooper Union, is a historian and critic of modern and contemporary architecture. His books include James Frazer Stirling: Notes from the Archive, The Writing of the Walls: Architectural Theory in the Late Enlightenment, Claude-Nicolas Ledoux: Architecture and Social Reform at the End of the Ancien Régime, The Architectural Uncanny: Essays in the Modern Unhomely, Antoine Grumbach, and Warped Space: Architecture and Anxiety in Modern Culture.

The Scenes of the Street and Other Essays

Anthony Vidler, an internationally recognized scholar, theorist, and critic of modern and contemporary architecture, is widely known for his essays on the most pressing issues and debates in the field. This volume brings together a collection of such writings—including the iconic, long unavailable “Scenes of the Street”—into one volume. Scenes of the Street and Other Essays showcases Vidler’s engaging and accessible expertise on both contemporary and historic subjects that are relevant to today’s concerns.

“Scenes of the Street,” a multi-faceted analysis of city planning is one such example; other essays in this volume include “Unknown Lands: Guy Debord and the Cartographies of a Landscape to be Invented,” “Transparency and Utopia: Constructing the Void from Pascal to Foucault,” and “The Modern Acropolis: Tony Garnier from La Cité Antique to the Cité Industrielle.”

Vidler writes in his introduction:

In the following essays, I have interrogated the struggle for an urban architecture in the modern period, its critiques and aspirations, in the belief that understanding the historical dimensions of the debate will lead to a renewal of interest in an architecture calculated to redeem, if only partially, our “planet of slums” and its deteriorating environment; an interest that will not simply reject “utopia” out of hand or fall back into the complacencies of nostalgia. Written during a period in which the debates themselves were actively engaged by critics and supporters of modernism, they reflect contemporary issues as they search for their prehistory. As historical inquiries, they inevitably also engage the transformations in history writing itself since 1970, intellectual responses to the social and political conditions of postwar modernity.

This fascinating series of essays on issues and figures is an invaluable resource for architects and art historians and enthusiasts of structure and substance alike.