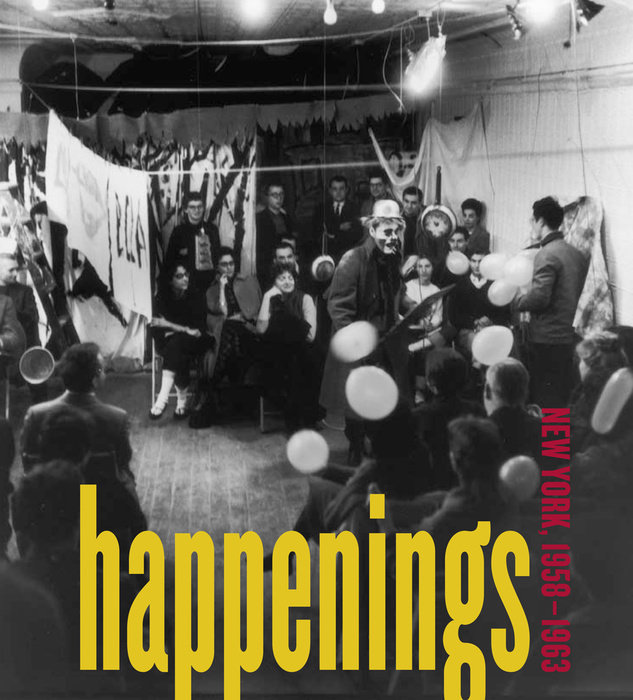 MILDRED GLIMCHER is an author and art historian who has contributed to numerous books and exhibition catalogs, including Adventures in Art: 40 Years at Pace; Jean Dubuffet: Towards an Alternative Reality; and Willem De Kooning-Jean Dubuffet: The Women.

In early October 1959, thirty-two-year-old Allan Kaprow presented a performance piece entitled “18 Happenings in 6 Parts.” This unique conjunction of visual, aural, and physical events, performed for an intimate art world audience by his friends and colleagues, would change the course of art history. The genre of artwork that evolved from this debut would become known as Happenings. Author Mildred Glimcher, an art historian, author, and close observer of contemporary art for more than fifty years, provides a vivid and comprehensive look not only at the events, but also at the culture and society that surrounded it.

This new volume provides a comprehensive look at this revolutionary art form. Prepared in conjunction with an exhibition at the Pace Gallery in New York, it focuses on the years that saw the movement’s birth in New York and Provincetown, Mass., and the artists who made the genre a legend: Red Grooms, Allan Kaprow, Robert Whitman, Jim Dine, Claes Oldenburg, Simone Forti, Carolee Schneemann. Together, they created a new and outrageous art form with an “anything goes” attitude, one whose influence is still felt within the contemporary art world.

Glimcher visits the formative years of the movement in great detail, describing each performance piece in words and photographs. The radical nature of the time and the works is evidenced by Red Grooms’s The Burning Building, Claes Oldenburg’s Ray Gun Spex, Jim Dine’s A Shining Bed, and many more. Happenings is heavily illustrated with photographs from the era, many drawn from a previously unpublished cache by Robert McElroy.

"But what actually happened at the Happenings? Because they were so ephemeral, and documentation is so patchy, art historians have spent decades trying to figure that out. So have their creators.... the most prolific photographer was Robert R. McElroy, a college acquaintance of [Jim] Dine’s, who hung out with the artists and photographed their work.... The thousands of images he made languished in storage until about five years ago, when Milly Glimcher, director of special projects at Pace Gallery, finally gained access." —The New York Times

"The timing for Mrs. Glimcher’s Happenings could not have been better. This exhibition is much more than a memento. . . The Happenings were indeed the necessary bridge that brought optimism into the 1960s and changes into our society through an awareness of life and art that many will never forget." —Robert C. Morgan, Whitehog Magazine

"This period of artistic experimentation paved the way for the future of performance art, defining in new terms for contemporary audiences what could and would be considered 'art'. The show is presented in conjunction with the release of Mildred L. Glimcher's new coffee table book, Happenings, New York, 1958-1963. Both the exhibit and book focus on the principle figures of the ‘Happening', including artist Allan Kaprow who introduced performance art to America in 1959, and coined the term ‘happening', as well as Jim Dine, Simone Forti, Red Grooms, Lucas Samaras, Carolee Schneemann, Robert Whitman, and Claes Oldenburg.... Glimcher's book includes original interviews with the artists, documenting not only a period of artistic evolution but the world in which it occurred." —Harper's Bazaar