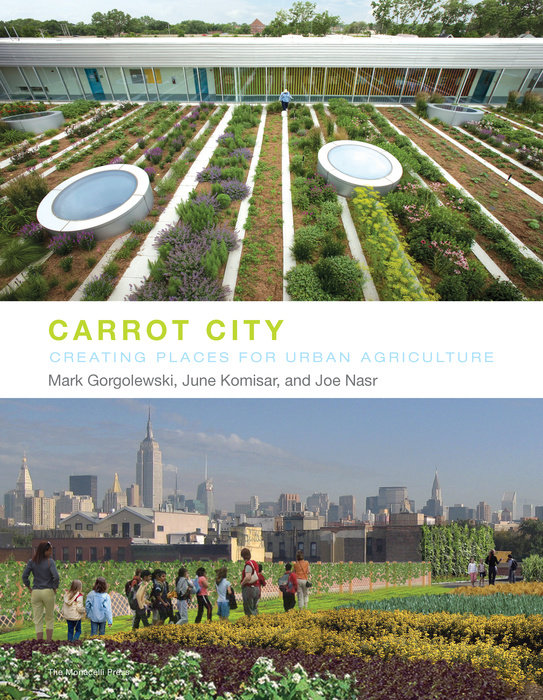 Architect Mark Gorgolewski is a professor in the Department of Architectural Science at Ryerson University in Toronto. A specialist in sustainable design, he has contributed to or authored dozens of books and papers on the subject. He is a board member of the Canada Green Building Council and Chair of the Association for Environment Conscious Building in the UK.

June Komisar, an architect and an associate professor in the Department of Architectural Science at Ryerson University, lectures and publishes widely on the topic of designing for urban agriculture and is a member of the Toronto Food Policy Council.

Joe Nasr is an independent scholar, lecturer, and consultant who teaches courses on urban food security and urban agriculture. His 1996 book Urban Agriculture: Food, Jobs, and Sustainable Cities was acknowledged as the standard text on the topic.

Carrot City is a collection of ideas, both conceptual and realized, that use design to enable sustainable food production, helping to reintroduce urban agriculture to our cities. Focusing on the need and desire to grow food within the city to supply food from local sources, the contributions of architecture, landscape design, and urban design are explored.

Forty projects demonstrate how the production of food can lead to visually striking and artistically interesting solutions that create community and provide inhabitants with immediate access to fresh, healthful ingredients. The authors show how city planning and architecture that considers food production as a fundamental requirement of design result in more community gardens, greenhouses tucked under raised highways, edible landscapes in front yards in place of resource-devouring lawns, living walls that bring greenery into dense city blocks, and productive green roofs on schools and large apartment blocks that can be tended and harvested by students and residents alike.

"A splendid new book from Monacelli Press marks the coming of age of urban agriculture — at least for the design world. Carrot City: Creating Places for Urban Agriculture is a timely reflection on design and urban food systems, and on the ways that agricultural issues are once again shaping urban spaces and buildings. At the heart of the book are over forty project case studies. These range from ambitious urban plans for the reintroduction of urban agriculture to our cities, to simple measures for growing food at home." —Design Observer

"Of late, growing vegetables in the city has become the preferred hobby for well-educated hipsters. But the modern concept of urban agriculture is much older and broader than its trendiness would suggest; for example, Ebenezer Howard's Garden City movement began in the late 1800s. The new book Carrot City: Creating Places for Urban Agriculture delves into the past and present of city farming, examining 40 recent and future projects that weave in edible greenery among the concrete. Authored by architects Mark Gorgolewski and June Komisar and urban agriculture expert Joe Nasr, the book highlights mostly Canadian and American projects, with a few from the U.K., the Netherlands, and one each from China and Argentina." —Residential Architect