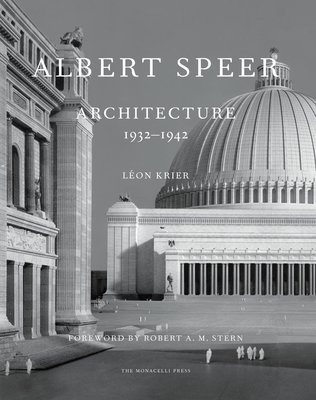 Born in 1946, Léon Krier is one of the most influential architects teaching and writing today. He has taught architecture and urbanism at the Royal College of Arts in London, and in the United States at Princeton University, Yale University, the University of Notre Dame, and the University of Virginia. He has worked extensively in Europe and North America and is currently consulting on projects in Guatemala, Romania, England, Belgium, Italy, France, and the United States. In 2003, he received the inaugural Richard Driehaus Prize for Classical Architecture.

Architect Léon Krier asks, “Can a war criminal be a great artist?” Speer, Adolf Hitler’s architect of choice, happens to be responsible for one of the boldest architectural and urban oeuvres of modern times.

First published in 1985 to an acute and critical reception, Albert Speer: Architecture 1932–1942 is a lucid, wide-ranging study of an important neoclassical architect. Yet is is simultaneously much more: a philosophical rumination on art and politics, good and evil. With aid from a new introduction by influential American architect Robert A. M. Stern, Krier candidly confronts the great difficulty of disentangling the architecture and urbanism of Albert Speer from its political intentions.

Krier bases his study on interviews with Speer just before his death. The projects presented center on his plan for Berlin, an unprecedented modernization of the city intended to be the capital of Europe.

“In 1985, Mr. Krier produced a monograph about Speer's designs, which display a cold, grandiose, neoclassical style. . . . The Monacelli Press has reissued it in a lavish edition but this time with the added twist of an introduction by the renowned architect Robert A.M. Stern, the dean of Yale's architecture school.” —The Wall Street Journal

“As the immense and waxing volume of scholarly and popular work on the Nazis (from Elie Wiesel to Quentin Tarantino) shows, no issue is forbidden territory. The more specific question, however, is whether Speer’s architectural oeuvre has any formal merit.” —The Nation

“Speer, Hitler's architect and also the Third Reich's minister of armaments and war production, manipulated scale, proportion, columns, and entablatures with great facility—not to mention prodigiousness—and the documentation of Speer's output is of interest. There are even moments I dare call sublime, but they are few. It's mostly crushingly heavy and funereal.” —Architectural Record