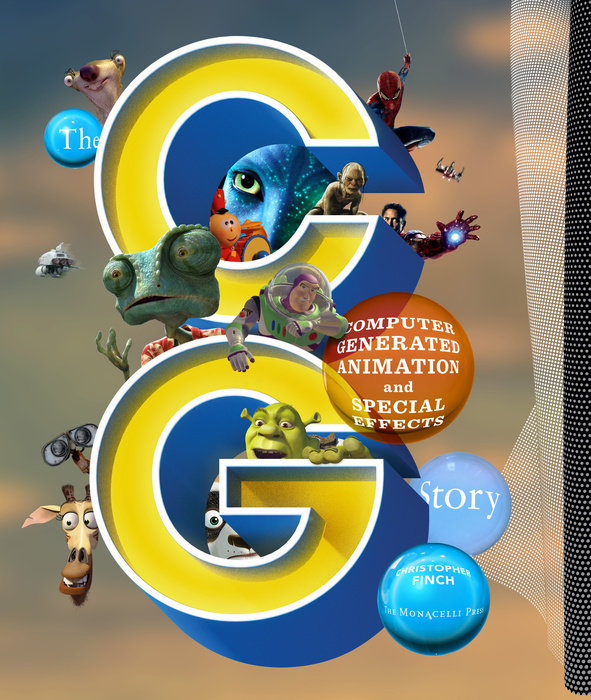 Christopher Finch, an artist and the author of acclaimed books on popular culture and fine art, lives in southern California. Finch was born on the island of Guernsey, in the English Channel. In the 1960s, after studying painting at Chelsea Art School in London, he began to write about the contemporary art scene for magazines ranging from Art & Artists and Art International to the British edition of Vogue. In 1968, he became an associate curator at the Walker Art Center in Minneapolis, and in the 1970s he resumed his writing career. He is the author of many books, including The Art of Walt Disney: From Mickey Mouse to the Magic Kingdoms and Beyond; Chuck Close: Work and Chuck Close: Life; Jim Henson: The Works; and Norman Rockwell’s America.

The Art of Walt Disney author Christopher Finch tells the story of the pioneers of CG films: producer/directors like George Lucas, Steven Spielberg, and Ridley Scott; and John Lasseter and Ed Catmull, founders of Pixar.

Computer generated imagery, commonly called “CG,” has had as big an impact on the movie industry as the advent of sound or color. Not only has it made possible a new kind of fully animated movie, but it also has revolutionized big-budget, live-action filmmaking. The CG Story is one of determined experimentation and brilliant innovation carried out by a group of gifted, colorful, and competitive young men and women, many of whom would become legendary in the digital world.

George Lucas, Steven Spielberg, and Ridley Scott embraced the computer to create believable fantasy worlds of a richness that had seldom if ever been realized on screen. Their early efforts helped inspire a revolution in animation, enabled by technical wizardry and led by the founders of Pixar, including John Lasseter and Ed Catmull, who would create the entirely computer-produced worlds of Toy Story and subsequent Pixar films. Meanwhile, directors like James Cameron used the new technology to make hybrid live-action and CG films, including the extraordinary Avatar. Finch covers these and more, giving a full account of today’s most significant CG films.

Praise for The CG Story

“A comprehensive, colorful coffee table tome that delves deeply, but not too geekily, into what is arguably the most momentous change in filmmaking since the advent of sound: digital visual effects. Finch traces the development from the first motion control shot (in 1977’s Star Wars) through the landmark computer-animated Pixar hits (Toy Story, The Incredibles) to the latest digitally rendered magic-scapes of The Hobbit and Life of Pi. The book is huge, the images—from movies famous and forgotten—exquisite.” —The Philadelphia Inquirer

“Outstanding book design and a well-told story. The CG Story is impressive in scale with many of its pages full-bleed close-ups from the history of computer-generated visual effects, beginning with a proto-computer in 1839(!) through to the state-of-the-art imagery in Life of Pi, Cloud Atlas, and The Hobbit: An Unexpected Journey. It's populated with programmers and designers who first had to fight to have their talents recognized by studios and directors; and it's equally devoted to the technological advances in computer science that made the artistry possible.” —Memphis Flyer

“What could be better in the iPad era than a real physical book that gorgeously celebrates the history and technology of computer graphics in the film industry? I couldn’t put it down. Every page is a ‘oh, I remember that’ moment. I would attend such CG milestone movies like Star Wars twice: once to sit in the middle of the theater and enjoy the story, and once to sit in the front row and immerse myself in the special effects. This book is a page-turning opportunity to relive that second viewing.” —Graphic Speak

“A beautifully designed coffee table book with gorgeous layouts and eye-arresting full-color photo spreads. An artist and prolific writer, Finch hasn’t penned a critical history but a techno-chronicle important for its detailed account of a movie industry revolution that occurred as the 20th century raced into the new millennium.” —Express Milwaukee

“Only a lavishly illustrated book that weighs as much as a coffee table could do justice to the subject of CGI and special effects—visually and verbally. With copious production stills and behind-the-scenes photos, Finch (author of the landmark coffee table volume The Art of Walt Disney) traces the history of the computer as a moviemaking tool, from John Whitney’s pioneering experimental films through the breakthroughs of George Lucas and his protégés, (including the group who broke off and became Pixar). Finch’s text is authoritative but written for fans and laymen, thank goodness.” —Indiewire’s “Movie Crazy”

“This lavish, 368 page survey of the computer graphics world starts with Michel-Marie Carquillat’s 1839 portrait of Joseph Marie Jacquard created using 24,000 punched cards and a jacquard loom through Pixar’s ground-breaking Toy Story to the spectacular CG scenery and special effects ofCloud Atlas, The Hobbit, and Life of Pi. The full-color plates capture and underline the sheer power of computer graphics and how they have transformed not only film-making but also business, advertising, and engineering.” —NetworkWorld “Gearhead”

“Finch declares that the development of computer animation is as important to the history of motion pictures as the introduction of color and sound, and the copious illustrations and blockbuster examples in his 368-page volume make a persuasive argument. With the turn of the millennium, computer-generated imagery became an essential tool of one giant film franchise after another:Harry Potter, Spider-Man, The Lord of the Rings, Pirates of the Caribbean, The Chronicles of Narnia. All this recent history and more are covered in enlightening detail . . . We’ve all been living through a remarkable period, during which the wildest visions of filmmakers can be realized and made palpable. The CG Story is a valuable account of one seismic transition. —Film Journal “Screener”

“Beginning with the simplest visual representations created in fabric through a jacquard loom (using punched cards) in the mid-19th century, the story moves quickly through the beginnings in the academic world expanding into the somewhat geeky/technical world of early SIGGRAPH meetings and conferences to the landmark film Toy Story (1995), the first animated film to be completely created on computers. This is a book about delight, wonder and visual exploration, and could not be satisfying in a digital format.” —VizWorld

“Finch offers a broad and unbiased view of the industry as a whole, covering many films and studios often unmentioned in most texts on the subject. The CG Story covers both special and visual effects as well as fully digital animated features. It progressively examines the technological strides each feature film has made for the medium. The text is accompanied by hundreds of behind the scenes images, photographs, and art work. This large format book is a beautiful volume worthy of a spot on your shelf.” —On Animation

“A comprehensive, and beautifully illustrated bible of the history of Computer Graphics in film.” —Popcults

“Still flailing around for holiday gift ideas for that special person in your life who genuflects at the temple of the animation industry? Flail no more, your holiday gift holy grail may have arrived with the publication of The CG Story. The 368-page book [yes, book, you remember those. . . . ] details the groundbreaking effects and history of computer generated animation, its effect on the film industry with a special focus on 1995’s Toy Story—the first feature film exclusively using CG technology.” —ToonZone