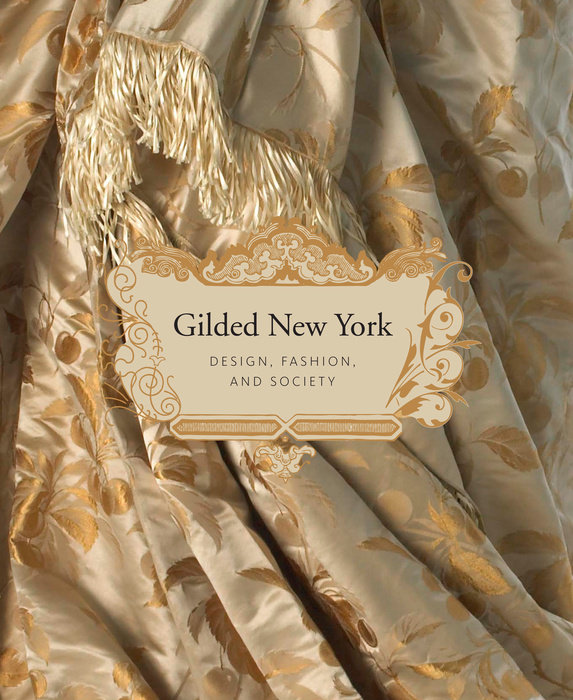 Donald Albrecht is curator of architecture and design at the Museum of the City of New York, where he has organized such major exhibitions as Paris/New York: Design, Fashion, Culture 1925-1940 and The American Style.

Jeannine Falino, formerly curator of decorative arts and sculpture at the Museum of Fine Arts, Boston, is now an independent curator specializing in decorative arts, particularly fashion, silver, and jewelry. Among her many publications are Crafting Modernism: Midcentury American Art and Design (Museum of Art and Design, 2011) and American Luxury: Jewels from the House of Tiffany (ACC, 2008).

The Gilded Years of the late nineteenth century were a vital and glamorous era in New York City as families of great fortune sought to demonstrate their new position by building vast Fifth Avenue mansions filled with precious objects and important painting collections and hosting elaborate fetes and balls. This is the moment of Mrs. Astor’s “Four Hundred,” the rise of the Vanderbilts and Morgans, Maison Worth, Tiffany & Co., Duveen, and Allard. Concurrently these families became New York’s first cultural philanthropists, supporting the fledgling Metropolitan Museum of Art and the Metropolitan Opera, among many institutions founded during this period. A collaboration with the Museum of the City of New York, Gilded New York examines the social and cultural history of these years, focusing on interior design and decorative arts, fashion and jewelry, and the publications that were the progenitors of today’s shelter magazines.

“Through jeweled tiaras and gold Ascot pins, family portraits gleaming with trompe l’oeil satin, and photos of the homes of the nouveau riche, the authors illustrate the transformations wrought by manna storms of wealth, the social mobility they encouraged and the cultural institutions they fostered, many of which continue to be cherished.” —Julie Lasky, The New York Times Gift Guide

“Forget the 1 percent. Consider them gracious and empathetic compared with the denizens of Gilded New York during two decades of excess from 1885 to 1905. This lavishly illustrated volume illuminates the mansions, costumes and other accouterments of the people whose philanthropy helped produce the Metropolitan Museum of Art and the Metropolitan Opera, but whose self-indulgence also gave big money a bad name.” —Sam Roberts, The New York Times

“The staggering sums spent on art at last week’s auctions were interpreted by dealers and critics alike as evidence of a new Gilded Age. At such a moment, it may be useful to take a hard look at the old one, the late-19th-century period defined by the aggressive buying sprees of a few newly minted industrialists.” —Karen Rosenberg, The New York Times

“Some of the greatest homes ever built in New York exist now only in archived photographs and memory. These were palace-like structures where young Astors, Vanderbilts, and Fricks would play—and barons of industry would relax in portrait-lined salons and under frescoed ceilings. Thanks to a new book, Gilded New York, and parallel exhibition at the Museum of the City of New York, newly resurrected images of these mansions are on display.” —Vanity Fair

"At the turn of the 19th century, status was everything. New York high society was coming of age. Rockefellers, Vanderbilts, Astors, and other wealthy families fashioned their homes in the image of European aristocracy. Balls and dinner parties dominated the scene. Gilded New York showcases the lavish furnishings, clothing, and interiors of a new elite whose love of over-the-top style continues to influence our culture." —Elle Decor

“Stunning photography of extravagant costumes and opulent locales transports the reader back into New York’s glamorous Gilded Age of the late-19 century. This impressive 216-page volume delves into the elite world of Old Money, and is a must-have for any lover of historical fashion.” —Traditional Home

“New York at the end of the 19th century was a wonderful, vibrant place—especially for the very rich. The economy had taken off like a bottle rocket since the beginning of the Civil War, and there was no income tax. Leading industrialists vied with one another to load their wives with glittering jewels and to create the most sumptuous mansions, giving rise to the epithet for the era, The Gilded Age. Now a new book examines this period.” —Women's Wear Daily

“This beautiful book explores the visual culture of New York’s social elite during the 'Gilded Age' and just before the technology of the gasoline engine, as well as Mr. Bell’s telephone and Mr. Edison’s electric light changed the world forever.” —New York Social Diary

"The exhibition for which this handsomely illustrated book serves as the catalog opens in November in the Museum of the City of New York’s new Tiffany & Co. Foundation Gallery. 'By 1892 nearly one-third of the country’s millionaires lived in New York City,' we’re told by Donald Albrecht and his coauthor, Jeannine Falino. The recent commercialization of halftone photography meant that all this growth and extravagance could be recorded. One of the book’s most telling images shows a gathering of gentlemen inside Sherry’s restaurant—with everyone on horseback." —Interior Design

“I recommend purchasing the book if this time period strikes your fancy. This cast of characters offers up endless entertainment. It is comprehensive, juicy and filled with gorgeous photos. In addition, it really showcases just how disproportionate life was in New York at the time. Like all good history lessons, there's a lot of insight on these pages that feels very relevant today. It paints a pretty fascinating portrait of those few in riches while so many more were in rags.” —The Huffington Post