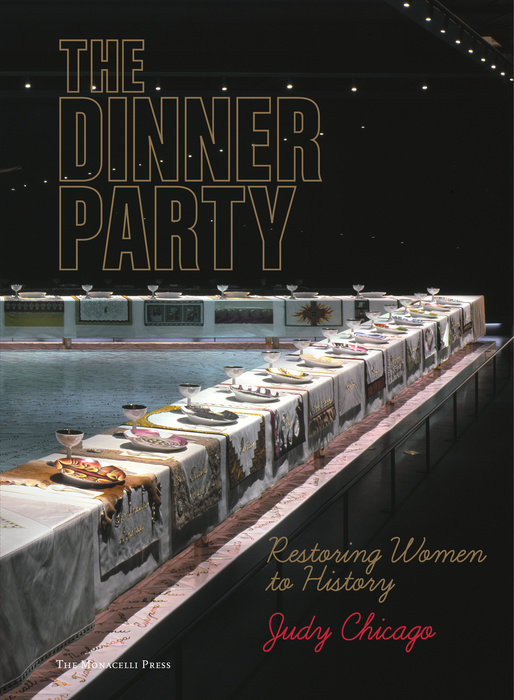 A preeminent artist, author, feminist, and educator, Judy Chicago’s work and life have been devoted to expanding women’s presence in the arts and in art history. Her art is frequently exhibited in the United States and internationally. The Dinner Party is her best-known work.

The official publication celebrating Judy Chicago’s feminist art masterpiece, The Dinner Party installation at the Brooklyn Museum, and an introduction to outstanding women in history.

Judy Chicago’s The Dinner Party is a defining work of feminist and contemporary art that brought women’s history to light on the national stage when it was completed in 1979. Published to coincide with Chicago’s 75th birthday and a nationwide series of events and exhibitions, the book features newly commissioned photography and two new essays by Chicago, along with essays by art historian Frances Borzello and historian Jane Gerhard, and a foreword from museum director Arnold Lehman.

The Dinner Party, a monumental triangular table, and the Heritage Floor on which the table rests, represents 1,038 women in history—39 by unique large ceramic plates and runners with another 999 names inscribed on the floor’s ceramic tiles. It has been seen by more than a million visitors during its international exhibition tour, and has been a principal destination at the Brooklyn Museum since its permanent housing in 2007. A perfect companion to a revolutionary artwork, the book is a must-have for both long-standing fans of Judy Chicago’s oeuvre and young artists and women looking for reflections of themselves in the history of Western Civilization.

Praise for The Dinner Party

“Organized to mirror the exhibition, each section is divided into four chronological wings, rather than chapters, and includes a short description of the woman represented and a photograph of her plate and place setting. Surrounding the photographs are summaries of the other women whose 999 names are inscribed on the ceramic tile floor (“Heritage Floor”) on which the triangular table rests. Many of the plates photograph well, particularly those for Sappho and Virginia Woolf, and handmade runners are spectacular. In this volume, published to coincide with her 75th birthday, Judy Chicago offers a vibrant visual and textual encyclopedia of female achievement.”
—Publishers Weekly

“Thirty-five years after the debut exhibition of Judy Chicago's The Dinner Party, this book highlights this monumental installation piece of feminist art. It takes a fresh look at the piece, which sought to right the omission of women artists from art history books. The artwork is described in detail in three chronological sections, beginning with prehistory and ending with the woman’s revolution of the 1970s. All of the women—from the central piece to the names listed on the floor tiles—are included for their contributions. Essays cover the biography of Judy Chicago, describe how the work arrived at the museum, and offer an art historian’s perspective on its place in history and the feminist movement. The piece, controversial for its depiction of a vulva form in each plate, was shown 16 times in six countries, with over a million viewers. This book is a fitting tribute.
—Choice: Current Reviews for Academic Libraries

“Serves as a kind of user’s manual to that iconic work of feminist art that once inspired an 87-minute debate in the U.S. House of Representatives over whether it was art or pornography. In this new book, Chicago explains in exquisite detail the art work surrounding the 1,038 women’s names memorialized by The Dinner Party and how the art expresses the fight for women’s rights from antiquity to today.”
—Big Think