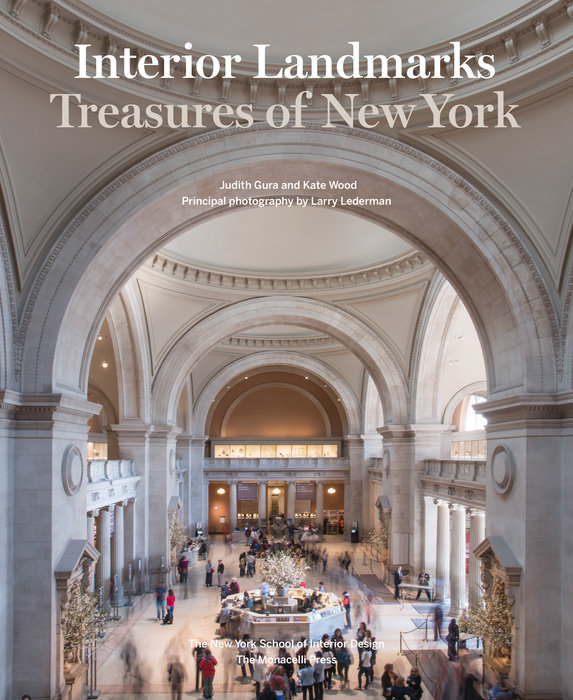 President of the advocacy group Landmark West!, Kate Wood is on the faculty of the Graduate School of Architecture, Preserva­tion, and Planning at Columbia University.

Larry Lederman is a noted photographer and the author of Magnificent Trees of the New York Botanical Garden.

Some are widely celebrated—Radio City Music Hall, the Great Hall of the Metropolitan Museum of Art, Grand Central Station—and others virtually unknown, all warrant preservation. This book is the first to present great landmarked interiors of New York in all their intricate detail, in a visual celebration of space that captures the rich heritage of the city.

In the fifty years since it was established in 1965, the New York City Landmarks Law has preserved for generations to come a remarkable number of significant buildings that represent New York City’s cultural, social, economic, political, and architectural history. Not only do the exterior facades of these buildings fall within the law’s purview, but, since 1973, many of their stunning interiors as well.

This book tells the colorful stories of 47 interior landmarks from the oldest to the youngest—from the grand Italianate and infamous Tweed Courthouse, the centerpiece of the largest corruption case in New York history, and the glamorous Art Deco Rainbow Room, constructed shortly after the repeal of the Prohibition—to the modernist 1967 Ford Foundation Building, whose garden-filled atrium exemplified sustainable design well before the concept became fashionable, and was hailed as “one of the most romantic environments ever devised by corporate man.”

Located throughout the five boroughs, the interior landmarks include banks, theaters, office building lobbies, restaurants, libraries, and more—spaces in which New Yorkers have worked, learned, governed, been entertained, and interacted with their communities for decades.

Readers will learn about their original construction and style, their exceptional design features, materials, and architectural details—then of the challenges to preserving them—whether they were unanimously accepted or hotly contested in legal battles—the restorations or re-imaginings that took place, and the preservationists, philanthropists, politicians, and designers who made it possible. Combining strong visuals and thorough research, this valuable reference work will fascinate all readers with an interest in the city’s history.

"Forty-seven tales of interior landmarks in New York are highlighted in this book, capturing a slice of history and indoor space. Gura and Wood write with attention to detail about their picks, from the celebrated Grand Central Terminal and the infamous Tweed Courthouse to the dark corners of the Pierpont Morgan Library (now the Morgan Library & Museum)."
—Metropolis

"While preservationists have saved many New York City facades from the wrecking ball, interiors have proven harder to protect. Interior Landmarks: Treasures of New York spotlights 47 preserved beauties, like Radio City Music Hall and the fantasy architecture of the Loew's Paradise Theatre in the Bronx."
—Elle Decor

"A living, breathing city can neither afford to exist as a museum nor lose its past. And in a city that changes as fast as New York, Interior Landmarks is a reminder that a fight for the right balance is never done and always necessary."
—The Atlantic's "CityLab"