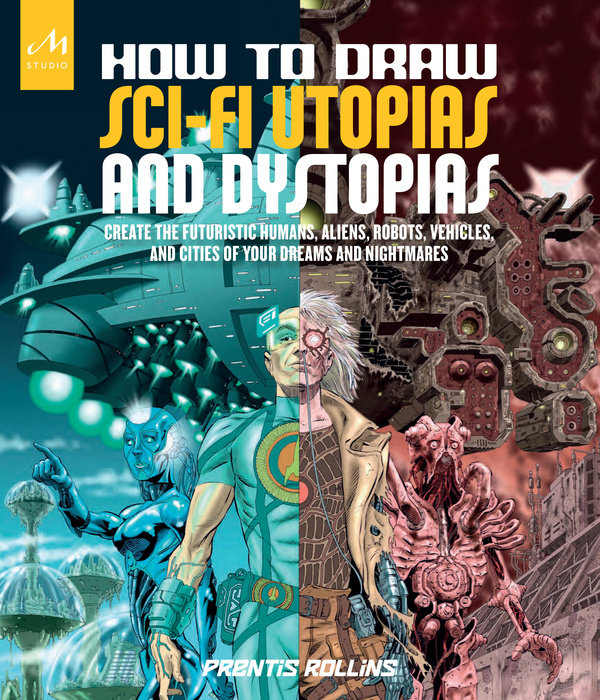 Prentis Rollins has been a professional illustrator for over 20 years. A long-time contributor to DC Comics, he has worked on top-selling projects like Green Lantern: Rebirth, Flash: Iron Heights, DC: One Million, Justice League of America, Green Lantern Corps, Impulse, JLA: Foreign Bodies, Power Company, The Big Book of Hoaxes, Supergirl, and Batman: The Ultimate Evil. He’s additionally contributed to New X-Men for Marvel Comics and Hardware, Icon, Static, Blood Syndicate, and Heroes for Milestone Media. He is the author of The Making of a Graphic Novel (The Resonator), The Furnace (Graphic Novel), and Survival Machine (Stories). He lives in London with his wife and three children.

How to Draw Sci-Fi Utopias and Dystopias

Create the Futuristic Humans, Aliens, Robots, Vehicles, and Cities of Your Dreams and Nightmares

A DC Comics illustrator shows readers how to conceptualize, draw, and digitally enhance their own science fictional worlds—whether for graphic novels, comics, movies, or video games.

Sci-fi imagery commands today’s popular culture, from Star Wars to The Hunger Games and The Walking Dead. For clear-eyed artists, ages 12 and up, who see that science fiction is becoming science fact at an astounding rate, How to Draw Sci-Fi Utopias and Dystopias gives an in-depth look at the process of completing sci-fi illustrations—from the thought behind them (brainstorming and conceptualization) to constructing basic forms and objects on paper, converting roughs into finished pencil drawings, inking them in, and coloring them in Photoshop. The book is organized around the perennial distinction between two ways of representing the future in sci-fi: the pessimistic and the hopeful, or dystopian and utopian.

After a basic primer on drawing (perspective, human faces, basic anatomy, light, shadow, rendering, and composition), five chapters detail the drawing of sci-fi humans, aliens and robots, land vehicles, flying vehicles, and cityscapes. Rollins demonstrates the astounding power of science fictional storytelling with 32 step-by-step case studies invented just for the book. Each demo is dated to a unique imagined future or alternate past and explained with fascinating detail. Examples include: battle-hardened mercenaries; a bizarre biomechanical alien that lives on a furnace-hot planet; a gigantic truck of the near future with a built-in apartment; a miles-long nuclear ramjet interstellar spaceship; a retro-utopia reminiscent of The Jetsons; and a galactic imperial city of staggering proportions.

How to Draw Sci-Fi Utopias and Dystopias is packed with professional tips on the right tools, techniques, and materials; how to draw tech; when to Google a reference photo or use a background from istockphoto.com; how to get and stay inspired; and how to execute a unique story. The gorgeous and varied artwork, and thoughtful storytelling combined with friendly instruction, will leave readers with hundreds of new ideas to create worlds of their own.

Praise for How to Draw Sci-Fi Utopias and Dystopias

"For all those clear-eyed artists, ages 12 and up, engaging in and reimagining this world, How to Draw Sci-Fi Utopias and Dystopias gives an in-depth look at the process of completing sci-fi illustrations—from the thought behind them to constructing basic forms and objects on paper, converting roughs into finished pencil drawings, inking them in, and coloring them in Photoshop.

Prentis Rollins teaches that the only way to create authenticity in a science fictional world is to root the imagined in the real, becoming the sole authority on its narrative and rationales. He demonstrates the astounding power of storytelling with 32 step-by-step case studies created and imagined just for this book."
--Thinking Animation