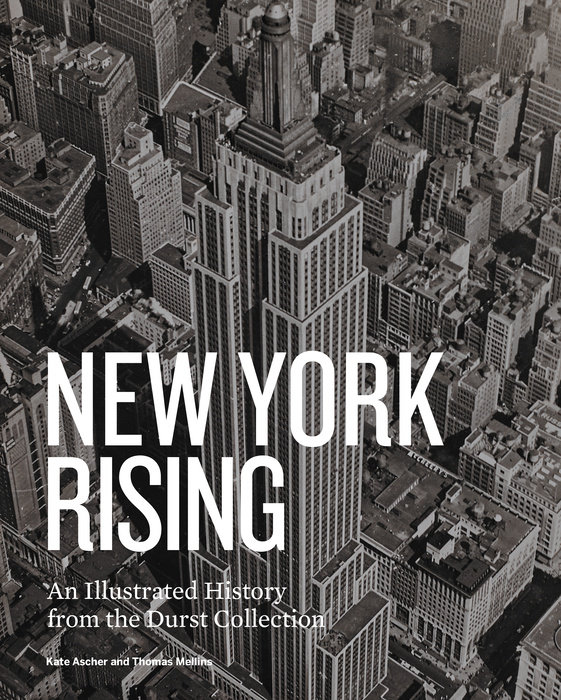 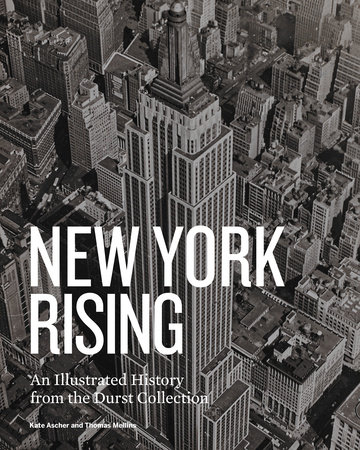 Kate Ascher is the Milstein Professor of Urban Development at the Graduate School of Architecture, Planning and Preservation at Columbia University and a principal at BuroHappold. She is the author of The Works: Anatomy of a City, The Heights: Anatomy of a Skyscraper, and The Way to Go: Moving by Sea, Land, and Air.

An Illustrated History from the Durst Collection

New York Rising is an illustrated history of real estate development in Manhattan, a story of speculation and innovation–of the big ideas, big personalities, and big risks that collectively shaped a city like no other.

From the first European settlement in the seventeenth century through the skyscrapers and large-scale urban planning schemes of the late twentieth century, this book presents a broad historical survey, illustrated with images drawn largely from the rich archival resources of the Durst Collection at Avery Architectural & Fine Arts Library, Columbia University.

The patriarch of one of New York City’s most prominent real estate families, Seymour B. Durst, was a bibliophile and an avid collector of New York memorabilia. His archival holdings–once known as the Old York Library and now the Durst Collection–reflect his fascination with the city’s street grid, mass transit, port, parks and open spaces, as well as its monumental buildings and signature skyline.

Ten leading scholars–the late Hilary Ballon, Ann Buttenwieser, Andrew Dolkart, David King, Reinhold Martin, Richard Plunz, Lynne B. Sagalyn, Hilary Sample, Russell Shorto, and Carol Willis–delved into the collection to select objects that reflect their own areas of interest and expertise. Using these materials, they have created visual narratives on specific topics, focusing on the Dutch and English governance of Manhattan, the growth of the city according to the Commissioners’ Plan of 1811, the emergence of the public transit system, the “race for height,” the rise of multi-family and affordable housing, the transformation of Midtown into a commercial center, urban renewal in the Moses era, the revival of Times Square, and the reclaiming of the waterfront as public space. Essays by Kate Ascher and Thomas Mellins provide a framework for exploring these topics.

"Kate Ascher and Thomas Mellins mined the 35,000 items that the developer Seymour Durst’s family donated in 2011 to Columbia University’s Avery Architectural and Fine Arts Library to produce New York Rising: An Illustrated History From the Durst Collection. Maps, ephemera, photographs and other illustrations generously punctuate the 10 chapters on subjects ranging from “Moving the People” to “Remaking Times Square” and written by an A-team of municipal experts that includes Russell Shorto, Hilary Ballon (who died in 2017), Andrew Dolkart, Carol Willis, Ann Buttenwieser and Lynne B. Sagalyn."
—The New York Times


"New York Rising is the perfect book for readers who want their NYC history in short, clearly written and abundantly-illustrated doses. The quality of the reproductions in the book is particularly impressive; its design and layout, credited to Yve Ludwig, deserves special mention. The Durst collection is a wonder and the contributors and editors have certainly done justice to its remarkable scope in this new book.... this is a beautiful book and a useful addition to your New York history bookshelf. Its size makes it a coffee table book but don’t let it sit on the coffee table. Move it to your bedside table, or wherever you put the books that you are really planning to read."—Brick Underground

"If you want to go on a visual journey that begins with Manhattan’s first European settlement, way back in the seventeenth century, up through the skyscrapers and urban planning of the late twentieth century, look no further than New York Rising: An Illustrated History from the Durst Collection.”
—6sqft