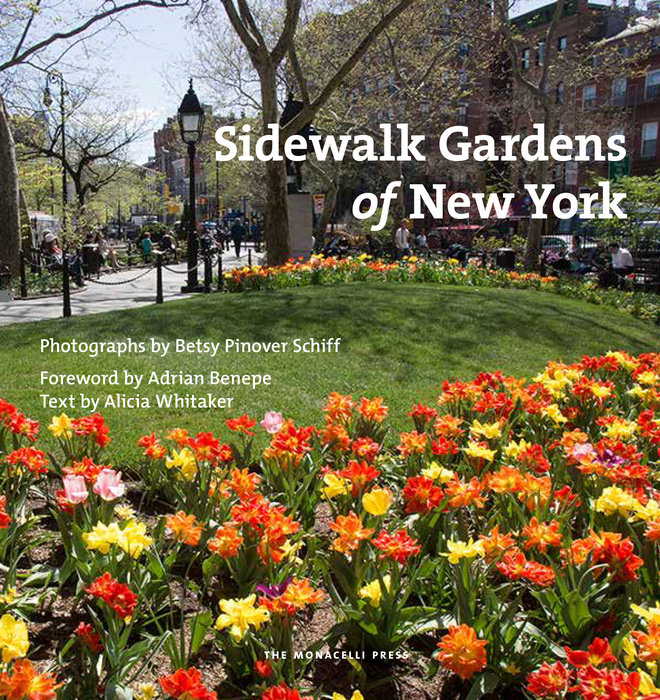 Betsy Pinover Schiff is the photographer of six books on gardens and landscape architecture, including three about New York City.  Her work has been featured in exhibitions in New York, the Hamptons, and Mexico and published in Architectural Digest and New York Spaces, among others.

Adrian Benepe, now senior director for parks development at the Trust for Public Land, served as commissioner of parks and recreation in New York City under Mayor Michael Bloomberg. During his tenure more than 800 acres of parkland were opened, including Brooklyn Bridge Park and the High Line.

Alicia Whitaker, a passionate gardener and horticulture specialist, serves on the board of the Horticulture Alliance of the Hamptons.

“New York City looks nothing—nothing—like it did just a decade and a half ago. It’s a place of newly gorgeous waterfront promenades, of trees, tall grasses and blooming flowers on patches of land and peninsulas of concrete and even stretches of rail tracks that were blighted or blank before.”
—Frank Bruni, The New York Times

“Betsy Pinover Schiff’s unerring eye and spectacular photographs tell the story of a city, and how its pre-Dorothy and Oz, colorless and downtrodden existence has been redone as if by wizardry in glorious Technicolor.”
—Adrian Benepe, former Parks Commissioner of New York City

Betsy Pinover Schiff has been photographing urban plantings and chronicling the “greening” of the city for more than two decades. Once limited to private spaces and elite neighborhoods, these plantings now proliferate throughout the five boroughs.

Sidewalk Gardens of New York reveals the transformation of the “city of concrete and glass” into one of the greenest and most richly planted urban centers in America. Nature and architecture combine in ways that will surprise even the most seasoned New Yorkers.

Featured are tree beds, planters, hanging baskets, and medians that mitigate the frenzy of the street; plazas and pocket parks that offer respite to pedestrians, building plantings that create a welcoming transition between public and private; community gardens; and parks, both the iconic and the newly planted along the waterfront in Brooklyn, Queens, and Lower Manhattan.

“New York may be a concrete jungle, but you can find some stunning greenery between the skyscrapers and high-rise apartment buildings if you know where to look. In Sidewalk Gardens of New York, photographer Betsy Pinover Schiff reveals the most gorgeous gardens on sidewalks across the five boroughs.”
—Town & Country

“It would take a monumental effort to travel across this huge metropolis to gauge just how widespread and transformative the trend of urban gardening has become. Luckily photographer Betsy Pinover Schiff has done that job for us. Open her new book, and you will find a comprehensive treasury of the new, green New York City. The beauty of Sidewalk Gardens of New York is that it can be both a travel guide to the new and greener city and also a primer for the urban home gardener. Anyone with horticultural desires can find inspiration in this book. Particularly in the chapter 'Urban Front Yards,' there are plenty of commonsense ideas for beautifying one’s own small patch of ground.”
—Gardenista

“Across the country, urban landscapes known for concrete and glass have been embracing foliage and flowers. And not just the occasional geranium-filled flower box. Greenery-lined waterfront promenades have replaced windblown stretches of highway, gem-like 'pocket parks' featuring flower gardens and waterfalls have replaced empty lots, and even blighted rail tracks have sprouted gardens brimming with native grasses and shrubs. 'I noticed it all of a sudden one day while walking to the Metropolitan Museum of Art,' said photographer Betsy Pinover Schiff, 'New Yorkers clearly love to enter and exit their homes and offices through gorgeous garden spaces.'”
—Associated Press

“A welcoming book of fine photographs and equally fine descriptions of the new garden conscious city world. As New Yorkers themselves, the authors’ love of place shines throughout the book.”
—Elaine Peterson, Board Member and Past President, The Horticultural Alliance of the Hamptons