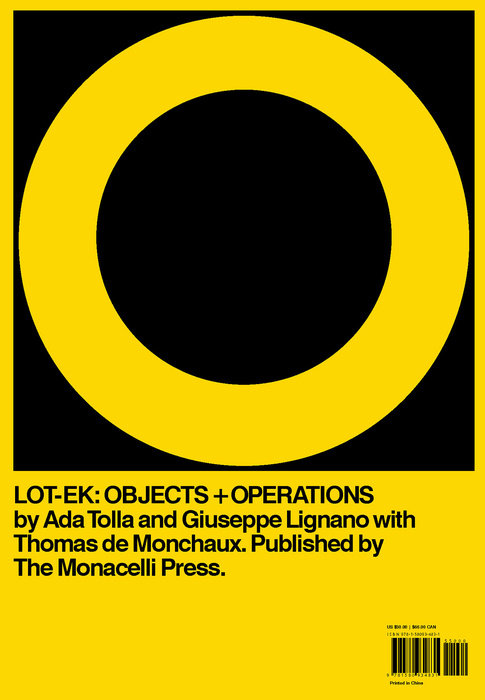 Ada Tolla and Giuseppe Lignano founded New York-based LOT-EK in 1993, designing residential, commercial, and institutional projects in the US and abroad, as well as projects for major cultural institutions and museums, including MoMA, the Whitney Museum, the Guggenheim, and MAXXI. Besides heading their professional practice, they also teach at Columbia University's Graduate School of Architecture, Planning and Preservation in New York. In December, Tolla and Lignano were recognized as USA Booth Fellows of Architecture & Design by United States Artists (USA).

Thomas de Monchaux writes for The New Yorker, Architect, and numerous other publications, and is an Adjunct Assistant Professor of Architecture at Columbia GSAPP.

LOT-EK is a design practice that believes in being unoriginal, ugly, and cheap. Also in being revolutionary, gorgeous, and completely luxurious. LOT-EK’s work reveals extraordinary transformations of ordinary things—from their famous shipping container projects onward—combining maker culture and hacker culture into beautiful and radical visions for sustainable and meaningful living. LOT-EK: Objects + Operations surveys dozens of projects—built, unbuilt and in-progress; polemical, practical, and in-between—complemented by photographs from LOT-EK’s multi-year URBAN SCAN project, a vast photographic document of infrastructure and incident, as well as essays by Thomas de Monchaux and interviews with founding partners Ada Tolla and Giuseppe Lignano.

"LOT-EK founders Ada Tolla and Giuseppe Lignano show a commitment to the industrial nonaesthetic with this book-as-manifesto. The bold type, brash color, and black-and-white photos underscore their partnership as 'a design practice that believes in being unoriginal, ugly, and cheap.'"
—Architectural Record

"The book itself is visually compelling... It closely examines a variety of 21st-century projects, with each example featured on the left-hand page and a detailed photo from their URBANSCAN project on the right-hand page. The result is a book that moves seamlessly between a macro and micro view of their design philosophy as it applies to transforming discarded materials into functional properties."
—Dwell

"Catalogued in LOT-EK: Objects + Operations (The Monacelli Press), the firm’s second monograph, are projects composed of upcycled materials—largely the shipping-container works that LOT-EK is known for. Such structures present the possibility that perhaps humanity’s discarded innovations can save us from the very problems we created."
—Surface magazine

"Coursing through it all are wry and wise ideas (high and low, folksy and academic) as well as homages to artists, designers, architects, and novelists on pages made of stiff cardboard—a fitting base for showcasing substantial work with a healthy dose of slapstick in the process."
—ARTnews

"Best known for their myriad buildings carved from shipping containers, this long-overdue showcase reveals them as considerably more versatile and eclectic than their shipping-container reputation would indicate. They describe themselves as designers of 'tough beauty.' Think of an architectural version of The Clash. Refined grit and spit. With a sense of humor..."
—ArchNewsNow

"More than merely building spaces using unexpected materials, Ada Tolla and Giuseppe Lignano are able to draw unimagined elegance from that which the world has flatly deemed 'ugly' …from residential and commercial spaces to cultural facilities and exhibition halls, they’re adored for their ability to produce beauty by focusing on places others don’t even see."
—Casa Brutus magazine