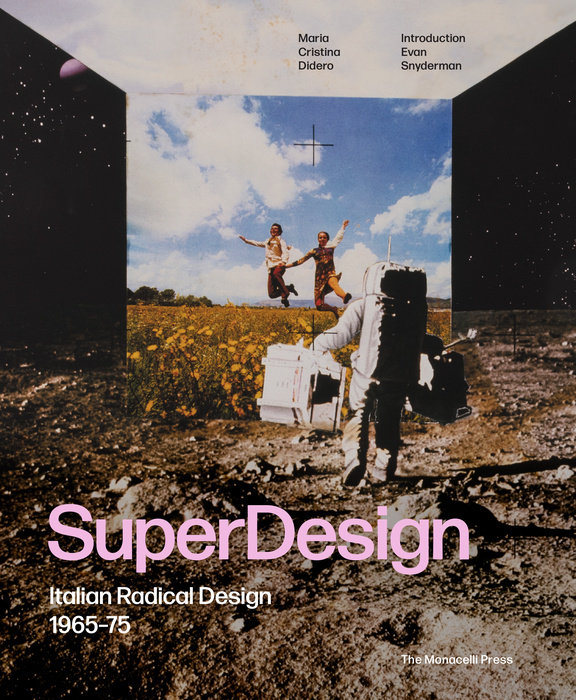 Maria Cristina Didero is an independent curator and freelance journalist whose writing appears in Domus,Vogue Italia, and other design publications. Based in Milan, she works internationally; she has curated numerous exhibitions in Italy and abroad, and contributed to several publications.

Deyan Sudjic is the director of the Design Museum, London. He is the author of numerous books on architecture and design, including The Language of Things and The Edifice Complex, and most recently, The Language of Cities.

Catharine Rossi is a senior lecturer in Design History at Kingston University, London. She is a specialist in Italian design, author of Crafting Design in Italy: From Post-war to Postmodernism, and co-curator of Radical Disco: Architecture and Nightlife in Italy, 1965–1975 at the Institute of Contemporary Arts, London.

SuperDesign charts the Italian Radicals’ bold experimentation in modern design from its birth through its continued influence on design today.

Radical Design was launched by art, architecture, and design students in Italy in the mid-1960s. What started as a youthful rally against the establishment and a rejection of design norms became a movement that brought together some of the most dynamic and avant-garde thinkers and makers across the country.

Through enigmatic, confrontational, and clever furniture and objects—such as the iconic lip-shaped Bocca sofa, or the Cactus coat-rack in green foam—as well as more public innovations including discotheque interiors and subversive performances, the Radicals projected design’s new era as equal parts Pop Art, play, Surrealism, and futurism. Told through exclusive interviews, unreleased photographs, original drawings and artwork unearthed from personal archives, and newly commissioned photography of rarely seen works, SuperDesign explores this fervent period of design that played out against the era’s social and political turmoil.

Featured designers include Archizoom Associati, Lapo Binazzi (UFO), Pietro Derossi (Gruppo Strum), Piero Gilardi, Ugo La Pietra, Gaetano Pesce, Gianni Pettena, Studio65, and Superstudio. The culmination of a decade of collecting and researching original examples of some of the most important and iconic works of the period, SuperDesign offers a unique new introduction to the legacy of the Italian Radicals.

"Against the backdrop of governmental and social unrest, a group of young architects and artists forges a politically resonant design movement. It could be a narrative of today, but the contingent in question is the subject of 'SuperDesign.'"
—Elle Decor

"Today’s resurgence of maximalism–an eclectic mix of patterns, materials, colors, shapes, and textures–speaks to a desire to break from imposing authority. It’s rooted in similar sentiments to Italian radicals and is materializing in a similar way aesthetically.... that [Italian radicals] remain relevant, somehow, speaks to the power of designers to process the sentiment of a time and give us something beautiful to behold, and, hopefully contemplate."
—Fast Co.Design