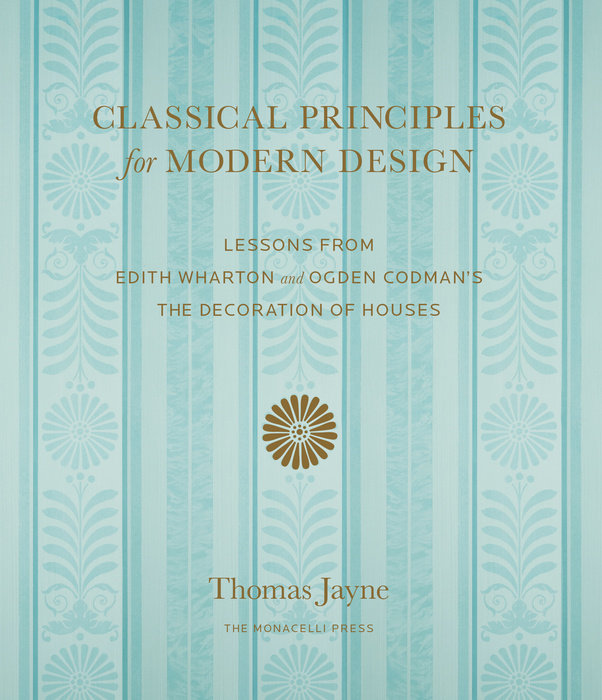 AD100 designer Thomas Jayne is founder and principal of Jayne Design Studio. His interiors reflect his passion and wide-ranging knowledge of classical traditions and his quest to further those traditions within contemporary design. Jayne holds a master's degree in American decorative arts from Winterthur and completed fellowships at the American Wing of the Metropolitan Museum of Art and the J. Paul Getty Museum. He is the author of the highly successful The Finest Rooms in America: Fifty Influential Interiors from the Eighteenth Century to the Present and American Decoration: A Sense of Place, a monograph on the work of Jayne Design Studio.

Lessons from Edith Wharton and Ogden Codman's The Decoration of Houses

Interior designer and decorative arts historian Thomas Jayne takes on the redoubtable Edith Wharton and her co-author Ogden Codman, whose 1897 book The Decoration of Houses is acknowledged as the Bible of American interior design. Wharton and Codman advocated for classical simplicity and balance, replacing the excesses of the Gilded Age. In Jayne’s view, “The Decoration of Houses is the level-headed, indispensable book on the subject. It is not an overstatement to say that it is the most important decorating book ever written.”

How much of Wharton and Codman’s advice and how many of their principles are still applicable today? In Classical Principles for Modern Design, Jayne argues that Wharton and Codman’s fundamental ideas about the proportion and planning of space create the most harmonious and livable interiors, whether traditional or contemporary. His authoritative and engaging text traces contemporary ideas about design elements and furnishing rooms back to Wharton and Codman and shows where his design approach coincides and where it diverges from their views. The book follows the chapter organization of The Decoration of Houses—chapters on walls, doors, windows and curtains, ceilings and floors, etc.—and adds important new perspectives on the design of kitchens and the use of color, both major subjects that Wharton and Codman did not address.

Drawing on his own work at Jayne Design Studio, Jayne has selected elegant, traditional interiors that demonstrate these principles. Projects range from a restoration of historic eighteenth-century public rooms in Crichel House in Dorset, England, to a mountain retreat in the wilds of Montana to an array of luxurious New York City apartments and country houses in the Hudson Valley. Captured in lush photographs by Don Freeman and others, all speak to Thomas Jayne’s commitment to the primacy of function, quality, and simplicity, derived from the ancient tradition of classical design. As he says, “Tradition is not about what was. Tradition is now.”

"Jayne makes what could be a very dry and stiff topic lively, understandable and inherently accessible to a broad audience with a conversational tone, lush illustrations and an easily followed organization. Younger readers, or those new to interior decorating, will find Classical Principles for Modern Design an easy and informative read."
—Antiques and the Arts Weekly


"In 1897, five years before the publication of her first novel, [Edith] Wharton co-wrote 'The Decoration of Houses' with architect Ogden Codman, Jr. This treatise on residential design remains of lasting interest to contemporary designers, including Thomas Jayne, known for interiors that artfully embrace and refresh historical tradition.... [Jayne] has revisited the book's maxims in a new guide of his own, 'Classical Principles for Modern Design.' In it, as here, he illustrates Wharton and Codman, Jr.'s dictums through the lens of his own designs—taking the odd liberty in modernizing their spirit." —The Wall Street Journal

"Every religion has its sacred text.... 'Like all sacred texts,' [Thomas Jayne] explains, 'it bears regular reading and rereading to find its meaning.' Sometimes, those revisits inspire a new translation that makes a holy work more accessible to contemporary worshippers. Thus Jayne’s freshly published Classical Principles for Modern Design, an insightful and amusing 21st-century reinterpretation of The Decoration of Houses. Call it the King Jayne Version."
—Architectural Digest

"Designer Thomas Jayne's Classical Principles for Modern Design takes on Edith Wharton and Ogden Codman's 1897 classic The Decoration of Houses, updating its tenets for contemporary homes and finding that most of its advice—including ideas on proportion and the planning of spaces—remains startlingly relevant today."
—Veranda

"Edith Wharton and Ogden Codman's 1897 manual, The Decoration of Houses, is 'the most important decorating book ever written,' asserts New York designer and decorative arts historian Thomas Jayne. In his book... Jayne evaluates the guide's relevance to current design and establishes the difference between contemporary elements and those Wharton and Codman held in the 19th century."
—Luxe Interior + Design

"Jayne explains that [Wharton and Codman] originally wrote The Decoration of Houses as a reaction to the decline of architectural importance in the designing of houses and the rising fad for interiors being overwhelmed with decorative objects and schemes.... Over 100 years later, Classical Principles for Modern Design asks which of the rules they set forth still apply and how can others be tweaked for modern living. Following the chapter organization of the original book, Jayne takes the reader through topics such as walls, doors, windows and curtains, and ceilings and floors, stressing how these fundamental rules are still important today."
—Galerie

"Thomas Jayne is known for his hip, historic interiors that weave elements from the past with modern design.... In his new book, Classical Principles for Modern Design: Lessons From Edith Wharton and Ogden Codman’s The Decoration of Houses he writes about the classical principles advocated by Wharton and Codman, and shows examples of how he has applied them to interiors by Jayne Design Studio. As to the rules, and breaking them, he shows that too, with stunning results."
—Incollect

"Wharton and Codman would be proud."
—Array