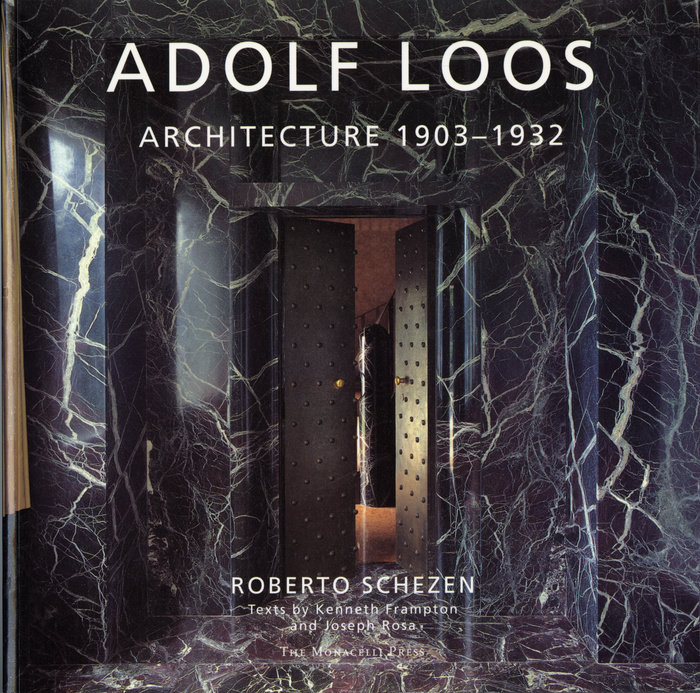 The late Roberto Schezen was an internationally renowned photographer whose work is now in the collections of the Museum of Modern Art and the Canadian Centre for Architecture, among others. His books include Vienna 1850–1930: Architecture, Newport Houses, and the Splendor series, on the palaces and houses of France, Italy, and Spain.

Kenneth Frampton, Ware Professor of Architecture at Columbia University, is a world-renowned critic and historian. He has taught at Columbia since 1972 and has written countless articles and books, including the seminal Modern Architecture: A Critical History and Studies in Tectonic Culture.

Joseph Rosa is curator of art and design at the Art Institute of Chicago. He is the author of A Constructed View: The Architectural Photography of Julius Shulman and Albert Frey, Architect.

Adolf Loos not only was part of the first wave of modern architecture but also served as an important source of inspiration for all architects who followed. He is emblematic of the turn-of-the-century generation that was torn between the traditional culture of the nineteenth century and the innovative modernism of the twentieth. Loos’s masterful “astylistic architecture” is captured in this volume by the esteemed photographer Roberto Schezen in over one hundred exceptional photographs.Starting with the refurbishment of his own apartment in 1903, twenty of Loos’s most significant buildings are beautifully displayed: Villa Karma, the Kärntner Bar, the Goldman & Salatsch Michaelerplatz Building, the Zentralsparkasse Bank, and the Steiner, Scheu, Moller, and Müller houses. Schezen’s vivid color and luminous black-and-white photographs display each building in detail, showing both the formal characteristics and the rich textures and materials Loos most frequently used.Complementing this remarkable visual material is Kenneth Frampton’s perceptive essay, which places Loos within the context of Viennese intellectuals of the time. His circle, which included Arnold Schönberg, Ludwig Wittgenstein, and at the center, Karl Kraus, explored the essential nature of architecture, and the other arts and sciences, through linguistic structures. Frampton identifies the hallmarks that Loos derived from these structures and with which he created his work: the blank, “degree-zero” exterior with its luxurious interior; his commentary on architecture’s position between art and function, plus subtle recollections of both the classic and the vernacular. All these ploys were to subvert typical architectural expectations. Joseph Rosa’s accompanying descriptions comprehensively discuss each building, from the circumstances surrounding the realization of the projects to the use of Loos’s architectural conventions.