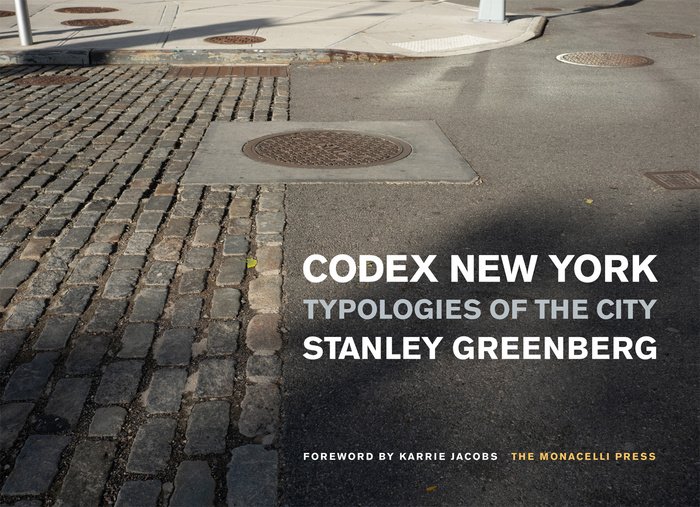 Stanley Greenberg is a Brooklyn-based photographer and author of numerous books, including Invisible New York: The Hidden Infrastructure of the City (1998), Waterworks: A Photographic Journey Through New York’s Hidden Water System (2003), Architecture Under Construction (2010), and Time Machines (2011). His photographs are held in prominent collections, including the Metropolitan Museum of Art, the Whitney Museum of American Art, the New York Public Library, the Yale University Art Gallery, and the Los Angeles County Museum of Art, among others. Greenberg has received a fellowship from the John Simon Guggenheim Foundation, as well as grants from the Alfred P. Sloan Foundation, the National Endowment for the Arts, the New York Foundation for the Arts, and the New York State Council on the Arts. His work can be seen at www.stanleygreenberg.org

Typologies of the City

A unique, quirky view of New York City as a vast collection of urban typologies, Codex New York marks one photographer’s revelatory journey through the city.

As a native New Yorker with a lifelong curiosity about urban infrastructure, photographer Stanley Greenberg—author of the bestselling Invisible New York--observes characteristics of the city that most people miss. And the more he explores the city, the more he understands it as a huge catalog of features that repeat, vary, morph, and multiply—block by block, neighborhood by neighborhood. He embarked on an extraordinary journey, walking every block of Manhattan from the Battery (where there is today much more land than when the Dutch first arrived) to Inwood (which retains more of its original topography than any part of the city) to photograph striking and subtle urban typologies along the way. Alleys, skybridges, parking sheds, architectural relics, tiny streets, water infrastructure—these and more were captured to create an incomparable visual chronicle of the city.

What are the objects that a city needs to be a city? Codex New York organizes them into an idiosyncratic field guide that prompts new paths of inquiry. When were they built? Codex New York also serves as a temporal marker; many of the empty spaces Greenberg photographed have already been built on, obscuring the views of the city that now exist only in images. Joining the ranks of great photographic documents of the city, Codex New York is a critical look at and investigation of what New York is made of.

"Stanley Greenberg walked every block in Manhattan, from the Battery to Inwood, river to river, to get the pictures in Codex New York: Typologies of the City. This is what he saw: not the grand vistas that tourists take in from the top of double-decker buses but the details available only to attentive pedestrians"
—William Meyers, The Wall Street Journal

"There’s no shortage of coffee table books about New York that show off the unmitigated beauty of the city, whether it’s new buildings (or ones that have been lost forever), striking interiors, or simply really pretty pictures of the changing seasons. Photographer Stanley Greenberg’s latest tome, Codex New York: Typologies of the City, does not depict any of those things. But the New York that it captures—Manhattan, specifically—is no less beautiful, albeit in a more humble sort of way."
—Amy Plitt, Curbed