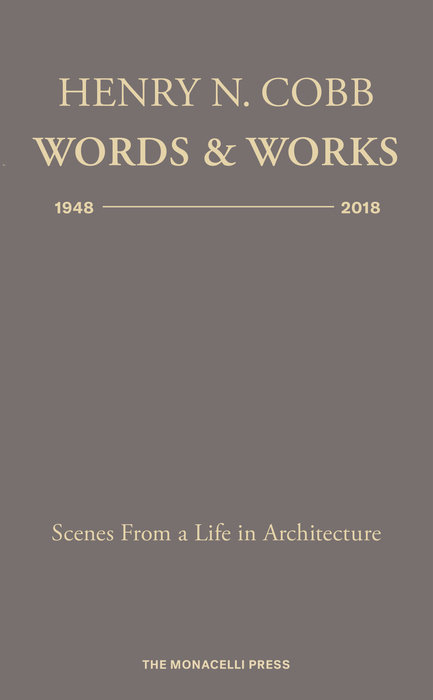 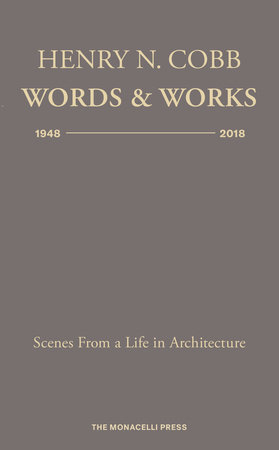 Henry N. Cobb is a founding partner of Pei Cobb Freed & Partners, directing numerous projects since its formation in 1955. His practice has embraced a wide variety of building types around the world, most notably including the John Hancock Tower (now 200 Clarendon St.), the John Joseph Moakley U.S. Courthouse in Boston, Fountain Place in Dallas, Place Ville Marie in Montreal, the Harvard Center for Government and International Studies, the US Bank tower (formerly Library Tower) in Los Angeles, and the Portland Museum of Art, Maine. His current projects include the Four Seasons Private Residences Boston and the International African American Museum in Charleston, S.C. Born and raised in Boston, Cobb and his wife, Joan Spaulding Cobb, live in New York.

Scenes from a Life in Architecture

The first book dedicated to the career of the preeminent American architect, Henry N. Cobb.

As a builder, teacher, and mentor, Henry N. Cobb has been one of the most eloquent voices in architecture for well over half a century. A founding partner of Pei Cobb Freed & Partners, where he has worked actively and continuously since its inception in 1955, his practice encompasses a wide variety of building types, with projects across the world that resound in the public imagination. Cobb’s sensitivity to place and use generate surprising and unparalleled forms in educational and civic buildings–such as the Portland Museum of Art in Maine, the Anderson School of Management at UCLA, the John Joseph Moakley U.S. Courthouse in Boston, and Palazzo Lombardia in Milan–or in corporate and commercial projects, such as the John Hancock Tower in Boston, Fountain Place Tower in Dallas, Tour EDF at La Défense in Paris, and Four Seasons Hotel and Residences at One Dalton, now under construction in Boston.

Henry N. Cobb: Words & Works 1948-2018 is his first book, uniquely combining poetic analyses of his distinguished works with essays and lectures that cover topics about architecture’s past, present, and future. His voice is complemented by interviews and discussions with Michael Graves, Robert A.M. Stern, Hal Foster, Charles Gwathmey, Paolo Conrad Bercah, Cynthia Davidson, Peter Eisenman, Mark Pasnik, and John Hejduk. Handsomely designed by OverUnder, this book is packaged in a portable size evocative of the Library of America series.

A longtime educator–and chair of the Harvard Graduate School of Design from 1980 to 1985–Cobb takes up his extensive subject matter in a thoughtful and engaging manner. To anyone interested in the development of American architecture in its transition from modernism to postmodernism and into the era of high-tech starchitecture, there are a number of treasures here to discover. Henry N. Cobb is a landmark survey–in words and works–of one of the great architects of our time.

"Henry N. Cobb: Words And Works is the best design monograph I’ve ever read. Yes, I mean read. This is not simply a glorified portfolio, an overly-heavy tome bursting with images. This is a monograph that’s meant to be read just as much as it is to be looked at."
—Jarrett Fuller, Design Observer

"A preeminent voice in architecture for decades, New York City architect Henry N. Cobb is the creative force behind such distinctive buildings as the Portland Museum of Art in Maine and Palazzo Lombardia in Milan. He is also a passionate educator and former chair of the Harvard Graduate School of Design. This book combines analyses of Cobb’s distinguished works with essays, interviews and lecture transcripts."
—Luxe Interiors + Design

"Henry Cobb, who once described himself in a 1985 Harvard lecture as “an architect who can make no claim to scholarship,” belies this self-abnegation on every page of this volume. His words here are every bit as carefully considered as his works are. . . .Cobb is never engaged in the sort of self-celebration that would be his right: his is an interrogation of his own work to rival the most incisive observer—a builder this adept at thinking about his own buildings will enrich your understanding not only of those he designed but of countless others as well."
—Modern Magazine