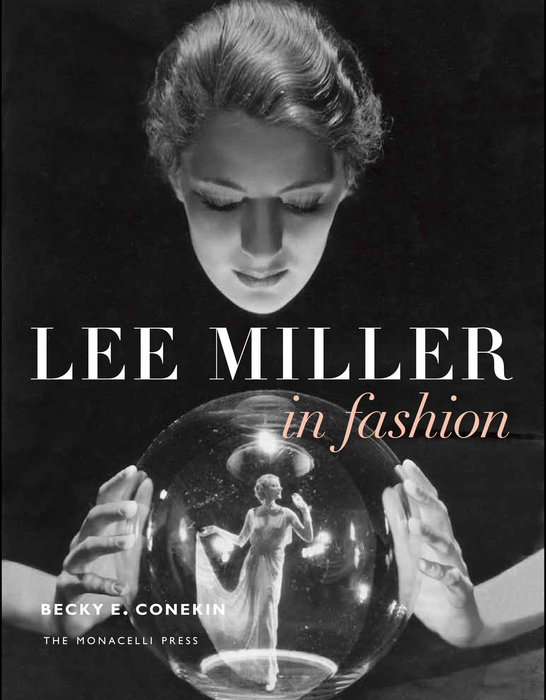 BECKY E. CONEKIN is a senior lecturer in history at Yale University and a senior research fellow in European Studies at the Whitney & Betty MacMillan Center for International and Area Studies. She has previously taught in Paris, Berlin, and London at the London College of Fashion. She is a fellow of the Royal Historical Society, the author of The Autobiography of a Nation: The 1951 Festival of Britain, Vernier: Fashion, Femininity & Form with Robin Muir, and the co-editor of The Englishness of English Dress and Moments of Modernity: Reconstructing Britain, 1945–1964.

Fashion model, surrealist artist, muse, photographer, war correspondent—Lee Miller defies categorization. She was a woman who refused to be penned in, a free spirit constantly on the move from New York to London to Paris, from husbands to lovers and back, from photojournalistic objectivism to surrealism.

Midcareer, she made the unprecedented transition from one side of the lens to the other, from a Condé Nast model in Jazz Age New York to fashion photographer, creating stunning images that imbued fashion with her signature wit and whimsy. Miller became a celebrated Surrealist under the tutelage of her lover, Man Ray, and then joined the war effort during World War II, documenting everything from the liberation of concentration camps to the daily life of Nazi-occupied Paris. Miller was recognized as “one of the most distinguished living photographers” during her hey-day as a fashion photographer, but an astonishing number of these images have remained unpublished. Lee Miller in Fashion is the first book to examine how her career as a model and fashion photographer illuminates her life story and connects to international fashion history from the late 1920s until the early 1950s.

The world of fashion emerges as the backbone of Miller’s creative development, as well as an integral lens through which to understand the effects of war on the lives of women in the 1940s and 1950s. Miller witnessed incredible acts of resistance born out through fashion—and her photographic record of women’s indomitable spirit even in times of war has remained an invaluable resource in fashion and global history. Lee Miller in Fashion presents these striking archival fashion photographs as well as contact sheets, memos, and Miller’s published illustrations, vividly setting the wit, irrepressible creativity, and daring of Miller within the larger story of women’s experience of fashion, art, and war in the twentieth century.

“In all her different worlds, she moved with freedom. In all her roles, she was her own bold self.”
—Antony Penrose

Praise for Lee Miller in Fashion

“Lee Miller was herself remarkably glamorous, although her best pictures are anything but: her stark and brutally truthful record of Germany at the end of World War II. The photographs in Lee Miller in Fashion might appear to be ordinary fashion photos of the interwar period—although they are sometimes bracing, such as the ones taken in London during the war itself—but the book is valuable for the way it expands our view of that protean spirit, an American model who became a European Surrealist, a fearless photojournalist, and other things besides.” —The New York Times Book Review

“As a woman, as one of the most perceptive photographers of the 20th century, Lee Miller enthralled because she made her own choices. Miller has been the subject of a number of books, and the muse for at least one fashion show, but Ms. Conekin’s very engaging, nicely researched book is the first devoted to Miller’s fashion work. Ms. Conekin has an amused eye for fashion characters, then and now, and with the help of Miller’s son, Antony Penrose, she makes it clear why her subject was an undaunted original.” —The New York Times

“Whether Lee Miller was shooting the atrocities of World War II or the latest collections from Paris, her eye was unflinching. In her new book, Lee Miller in Fashion, Becky E. Conekin looks back on the photographer, model and muse's audacious life in style.” —W Magazine

“Miller, one of the most remarkable women of her day, has been justly celebrated for her war photographs. But almost nothing has been written about her fashion photographs, which were done for American, British and French Vogue and which also have an unusual quality, showing a considerable degree of imagination and often surrealist elements. The book features photographs her son and executor Antony Penrose retrieved from the Condé Nast archives, many of which were never printed and have never been seen before.” —Women's Wear Daily

“Recognised as one of the most distinguished photographers of the 20th century, Lee Miller was a busy woman. In her mid-twenties she made the unprecedented leap from Jazz-Age fashion model to fashion photographer, later became a celebrated Surrealist under the guidance of lover Man Ray, then joined the war effort during the second world war, documenting everything from the liberation of concentration camps to the abandoned apartment of Eva Braun, Hitler’s mistress, for the pages of Vogue. Here Conekin focuses on the fashion, in Miller’s modelling work, photographs and illustrations. Special features: the devil is in the detail—many unseen archive photographs, contact sheets and memos bring Miller’s wit and daring into vivid focus.” —Financial Times

“Lee Miller lived a life like no other, moving from anguish to freedom, from high glamour to high achievement. Miller’s fashion photography is less well known than her art and war photographs; Lee Miller in Fashion attempts to fill a gap with never-published images and others unseen since the 1940s. Conekin’s coverage of British Vogue during the war years is a particular revelation.” —1st Dibs Introspective

“Lee Miller in Fashion recounts the story of a girl who overcame trauma to become undeniably successful, strong and seductive—Man Ray was just one of many admirers who immortalized her in numerous works. But she immortalized herself as well, primarily through fashion self-portraits that illustrate how her talent defied boundaries.” —Lip Service, The Diane von Furstenberg Blog

“A wondrous and alluring story of a woman who was in total control of her life and lived without fear or boundaries. Its appeal reaches far beyond just those of us who are tuned into fashion: It is a great chronicle of the times starring a women whose talents took her everywhere.” —New York Journal of Books

“Fashion icon Lee Miller is the subject of a glorious new book by Becky E. Conekin. A must-read for any well-read fashionista.” —Stylist.com

“Fashion model, surrealist artist, muse, photographer, war correspondent—Lee Miller defies categorization. Mid-career, she made the unprecedented transition from one side of the lens to the other, from a Conde Nast model in Jazz Age New York to fashion photographer, creating stunning images that imbued fashion with her signature wit and whimsy.” —Publishers Weekly