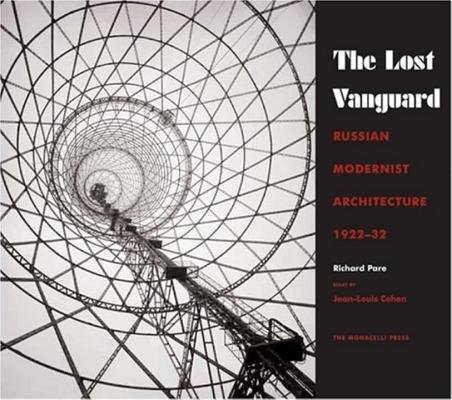 Architectural photographer Richard Pare has spent more than a decade documenting Soviet modernist architecture. He is the former curator of photographs at the Canadian Centre for Architecture and the author of Tadao Ando: The Colors of Light, Egypt: Reflections on Continuity, and Court House: A Photographic Document.

Phyllis Lambert, who wrote the book's foreword, is the founding director of the Canadian Centre for Architecture in Montreal.

The Lost Vanguard documents the work of modernist architects in the Soviet Union during the years following the 1917 revolution and civil war. In little more than a decade, some of the most radical buildings of the twentieth century were completed by a small group of architects who developed a new architectural language in support of new social goals of communal life. Rarely published and virtually inaccessible until the collapse of the Soviet regime, these important buildings have remained unknown and unappreciated.

Richard Pare’s photographs reveal the powerful forms of these structures, some still in use but many now abandoned and decayed. Massive industrial complexes like the Dnieper River Dam and MoGES, which supplies electricity to the city of Moscow; vast communal houses for workers, including Ginzburg’s Narkomfin; commercial buildings and government offices; and smaller clubs and theaters were all built in this brief period.In an incisive essay, architectural historian Jean-Louis Cohen surveys the history of the period, providing a context for the emergence of this startling new architecture in parallel to contemporary experiments in Europe.