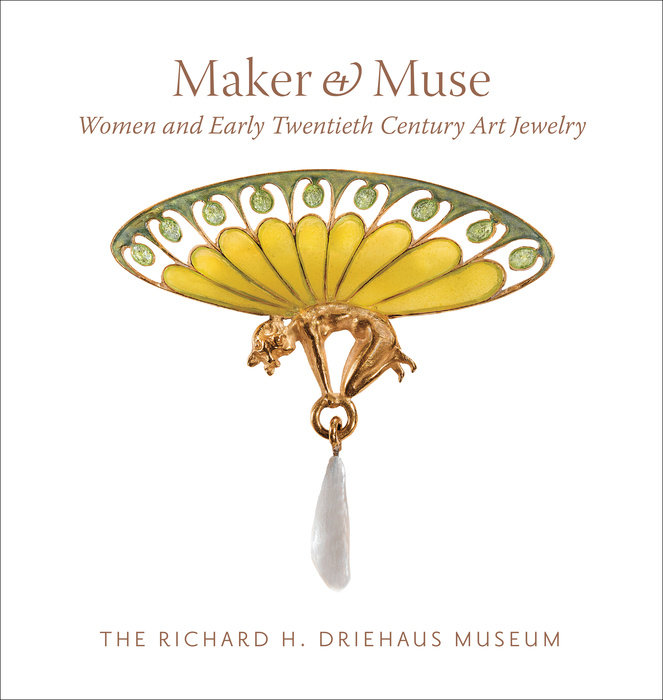 Elyse Zorn Karlin, curator of Maker & Muse, is a jewelry historian and co-director of the Association for the Study of Jewelry & Related Arts. She is freelance curator and author of several books on historical jewelry.

Emily Banis Stoehrer is the Rita J. Kaplan and Susan B. Kaplan Curator of Jewelry at the Museum of Fine Arts, Boston. She was the co-curator of Hollywood Glamour: Fashion and Jewelry for the Silver Screen (2014) at the MFA.

Sharon Darling is a retired curator and museum director with a special interest in Chicago decorative arts. She curated the seminal exhibition Chicago Silver and authored the accompanying book, which presented new research on the Chicago Arts and Crafts movement.

Jeannine Falino is an independent curator, a museum consultant, and an adjunct curator at the Museum of Arts and Design in New York. She was co-curator of the recent exhibition Gilded New York: Design, Fashion & Society (2013) at the Museum of the City of New York.

Yvonne Markowitz is the Rita J. Kaplan and Susan B. Kaplan Curator Emerita at the Museum of Fine Arts, Boston. Among her publications are American Luxury: Jewels from the House of Tiffany and Imperishable Beauty: Art Nouveau Jewelry.

Janis Staggs is Associate Curator at Neue Galerie New York. In 2008 she curated Wiener Werkstätte Jewelry; the first exhibition on the topic held in the United States, and authored the companion book.

A new perspective on woman’s role in the world of art jewelry at the turn of the twentieth century—from Art Nouveau in France and the Arts and Crafts movement in Britain, to Jugendstil in Germany and Austria, Louis Comfort Tiffany in New York, and American Arts and Crafts in Chicago—and the most extensive survey to date of the sheer diversity and beauty of art jewelry during this period.

Accompanying a groundbreaking exhibition at The Richard H. Driehaus Museum in Chicago, this lavishly illustrated catalog showcases nearly two hundred stunning pieces from the Driehaus Collection and prominent national collections, many of which have never been seen by the public.

Women were not only the intended wearers of art jewelry during the early twentieth century, but also an essential part of its creation. Their work—boldly artistic, exquisitely detailed, hand wrought, and inspired by nature—is now widely sought after by collectors and museums alike. From the world’s first independent female jewelry makers, to the woman as artistic motif, this jewelry reflected rapid changes in definitions of femininity and social norms.

Essays by noted scholars explore five different areas of jewelry design and fabrication, and discuss the important female figures and historic social milieu associated with these movements—from the suffragists and the Rational Dress Society in England; to the Wiener Werkstätte and Gustav Klimt; and the Art Nouveau masters René Lalique and Alphonse Mucha, who depicted otherworldly women in jewelry for equally fascinating patrons like Sarah Bernhardt.

The essays are illustrated by historic photographs and decorative arts of the period as well as the extraordinary pieces themselves: hair combs, bracelets, brooches, and tiaras executed in moonstones, translucent horn, enamel, opals, aquamarines, and much more. As Driehaus writes in his introduction to Maker & Muse, “Essential as these elements are, the metal and gemstones of a necklace—or a brooch or a bracelet—are like a canvas. It is the designer who evokes true greatness, beauty, and value from them. Neither monumental nor mass-produced, the object contains a memory of a particular artist’s skilled hand.”


Praise for Maker and Muse

“This beautifully illustrated book contains seven well-organized chapters full of insight on the period, covering the British, German, Austrian, and American Arts and Crafts movements from 1890 to 1910 and the French and American Art Nouveau movements from 1900 to 1915. The photography, the editing, and the quality of the paper and printing are superb. This book will find its way into the libraries of scholars, collectors, and professionals interested in the Arts and Crafts and Art Nouveau movements, which still influence jewelry artists more than a century later.”
—GIA (Gemological Institute of America Inc.)

“Highlights include four pieces by Mrs. Newman of London, who paved the way for female jewelry makers of the British arts and crafts movement; a brooch depicting a female nude by René Lalique; a pin by the Wiener Werkstätte to be worn by the hostesses at Vienna’s premier Cabaret Fledermaus; rare designs by Julia Munson, the first director of Louis Comfort Tiffany’s jewelry studio; and exceptional works from Chicago’s Kalo Shop, founded by Clara Barck Welles.”
—The Magazine ANTIQUES

A palatial Chicago home from the Gilded Age is the setting for a new exhibition called Maker & Muse at the Driehaus Museum, featuring hundreds of pieces of one-of-a-kind jewelry. Beyond the artfully made works in Art Nouveau and Arts and Crafts styles, the exhibition also looks at the growing role of women in early 20th century design and craftsmanship.”
—WTTW Chicago Tonight

“Maker & Muse celebrates the considerable contribution women made to jewellery production and design at the turn of the 20th century, which was ground-breaking then, and still highly relevant today.”
—Jewellery History Today

“Like other art forms, jewelry production has cycled through trends and eras, and Art Jewelry isn’t just your everyday diamond solitaires. Art Jewelry was created between the late Victorian Era and World War I, a time when women’s roles in society were changing drastically and industrialization was reinventing the world. The jewelry reflects this exciting, tempestuous climate; curator Elyse Zorn Karlin cites a 'rebellion against the strictures of the past and a look toward an exciting, less-encumbered future' as one of the driving forces behind the movement. It’s less restricting-diamond-choker and more delicate lines, imaginative shapes, and bright colors. You’ll want to try the bijoux on yourself.”
—Chicago magazine