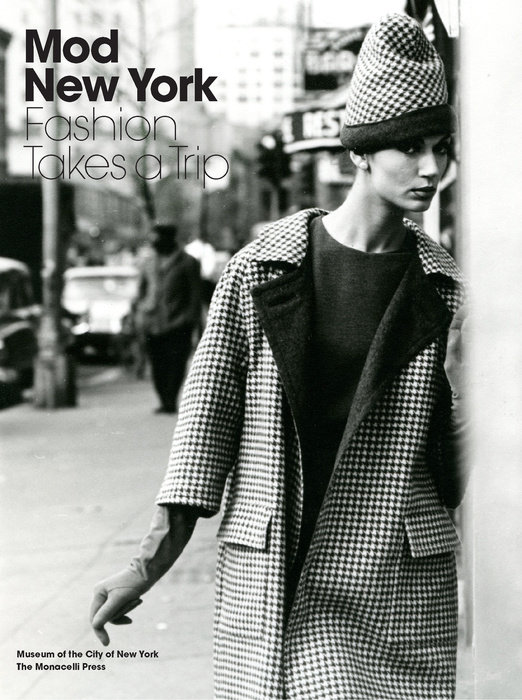 Donald Albrecht is curator of architecture and design at the Museum of the City of New York, where he has organized such major exhibitions as Gay Gotham: Art and Underground Culture in New York, Paris New York: Design, Fashion, Culture, and Cecil Beaton: The New York Years.

Phyllis Magidson is Elizabeth Farran Tozer curator of costumes at the Museum of the City of New York. Her recent exhibitions include Dressing Room: Archiving Fashion, Stephen Burrows: When Fashion Danced, Worth/Mainbocher: Demystifying the Haute Couture, and Notorious and Notable: Twentieth-Century Women of Style.

Mod New York traces the fashion arc of the 1960s and 1970s, a tumultuous and innovative era that continues to inspire how we dress today. During this period, demure silhouettes and pastels favored by First Lady Jacqueline Kennedy exploded into bold prints and tie-dyed psychedelic chaos and ultimately resolved into a personal style dubbed by Vogue the “New Nonchalance.”

Accompanying a major exhibition at the Museum of the City of New York, this book is beautifully illustrated by two hundred groundbreaking and historically significant designs by Halston, Geoffrey Beene, Rudi Gernreich, Yves Saint Laurent, André Courrèges, Norman Norell, and Bill Blass, among many others, all drawn from the renowned costume collection at MCNY.

By the mid-1960s, clothing assumed communicative powers, reflecting the momentous societal changes of the day: the emergence of a counterculture, the women’s liberation movement, the rise of African-American consciousness, and the radicalism arising from the protests of the Vietnam War. New York City, as the nation’s fashion and creative capital, became the critical flashpoint for these debates. Authoritative essays by well-known fashion historians Phyllis Magidson, Hazel Clark, Sarah Gordon, and Caroline Rennolds Milbank explore the ways in which these radical movements were expressed in fashion. Of special note is Kwame S. Brathwaite’s presentation of the Grandassa Models and “Black is Beautiful” movement, which is illustrated with photographs by his father, Kwame Brathwaite.

"In the 1960s, the fashion world turned "topsy-turvy," as TIME noted in 1967. Nearly every aspect of that revolutionary decade, from the civil-rights movement to the space race, was somehow reflected in the clothing worn by American women. The book Mod New York: Fashion Takes a Trip... takes a look at the influences behind and lasting influence of American fashion in the years between 1960 and 1973."
—Time.com

"This catalog of an exhibition at the Museum of the City of New York (MCNY), edited by its curators, is comprised of eight essays taking various angles on American fashion in the 1960s to early 1970s, amply illustrated with images of garments from MCNY's collection alongside vintage photos from Vogue and Harper's Bazaar.... This accessible work stands out by contextualizing fashion alongside major social change—the Youthquake, birth control, the civil rights movement, and Vietnam War protests."
—Library Journal

"A fascinating look at a crucial shift in American fashion."
—Kirkus Reviews