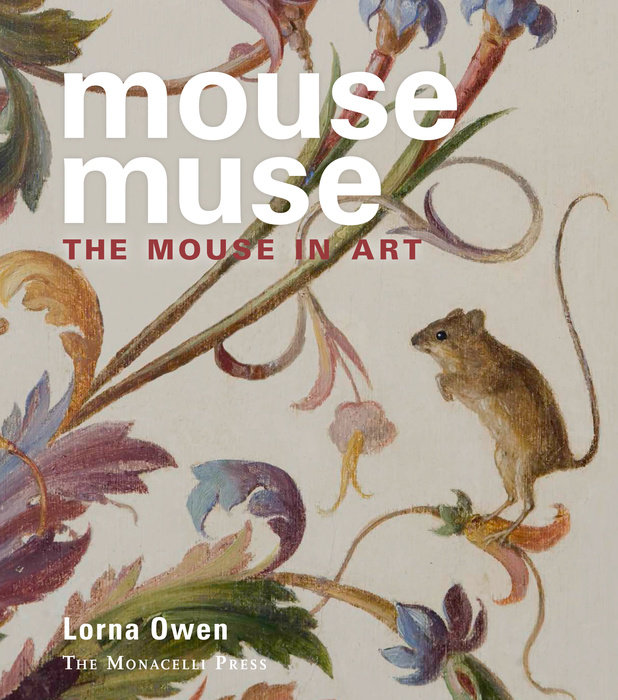 Lorna Owen is a writer, editor, and author of the popular blog Mouse Interrupted. Previously she was Senior Editor for Nan A. Talese, the literary imprint of Doubleday/Random House. She received an M.A. from The Johns Hopkins School of Advanced International Studies, studied studio arts and art history, and served a year’s stint managing the workshop of an Italian artist in New York City.

The Mouse in Art

A beautifully designed introduction to art history by way of artworks that feature the mouse—from the ancient world to drawings by Picasso, Disney, and Art Spiegelman.

Across centuries and civilizations, artists have used the mouse—the planet’s most common mammal after us—to illustrate our myths and beliefs. Mice have appeared as Japanese symbols of good luck or medieval emblems of evil, in Arab fables, Russian political satire and Nazi propaganda, as scientific tools and to help us challenge the way we see nature.

With more than 80 rarely reproduced works—including paintings by Hieronymus Bosch and Gustav Klimt, a silkscreen by Andy Warhol, a print by Hokusai, a photograph by André Kertész, a sculpture by Claes Oldenburg, a video installation by Bruce Nauman, a performance by Joseph Beuys, and many more—Lorna Owen has created an engaging presentation of an extraordinary range. The pieces, which represent every period of visual art, are accompanied by Owen’s intriguing text about the story behind each work. She has combined her passion for art and her empathy for the unsung archetype of the animal kingdom to explain not only how or why the artist came to use the mouse as a subject, but how the art, in the end, reveals more about us than it could ever reveal about this humble creature.

“Mouse Muse includes over 80 works in a compact hardback, with each example joined by a short essay exploring its history and reason for having a mouse, the full print of the piece paired with a detail of the mouse embedded in the text. And the reasons for including mice have changed over time, from empathetic bronzes in ancient Rome found in nearly every household, to an unwanted symbol of mortality lurking in still-lifes. Owen tracked down the vermin by examining works by artists known for their love of nature like Frans Snyders and Franz Marc, and even delved into journals and letters by artists, finding some surprises along the way such as that ‘Kandinsky was inspired by the placental tissue of a mouse for his biomorphic abstract painting “Capricious Forms.”’ Plenty of these discoveries are pocketed in Mouse Muse.”
—Hyperallergic

“This year there's a large crop of high-concept, gorgeous picture books, among them Lorna Owen's Mouse Muse. Based on Owen's popular blog, Mouse Muse examines the planet's most common mammal and frequent stand-in for humans as it appears throughout art history. Images range from ancient pre-Colombian sculpture to Pablo Picasso and Joseph Beuys; there's even a mouse in the only known oil painting by Aubrey Beardsley. The little guys are everywhere.”
—The Star-Ledger (Newark)

“A furry streak in a dark house usually elicits screams and calls for deadly mouse traps. But for author Lorna Owen, the encounter on her first night in her home sparked a passion, an investigation and a new book, Mouse Muse. In addition to the statements about politics, the human condition and culture, the book is also enjoyable to read on a simple level. The mouse in many of the images is small and difficult to spot, inviting a kind of ‘where’s Waldo adventure’ in its reading and many of the images are simply beautiful.”
—The Register Citzen

“In her clever new book, Lorna Owen traces the history of the mouse from its humble origins to its place in the visual arts. Lavishly illustrated and thoughtfully researched, with vintage and contemporary color photographs, the mouse takes on a new role and we discover how important it was to many artists, from Bosch to Picasso.”
—Litchfield Magazine

“Lorna Owen has compiled an adorable selection of images of ‘nature's most humble creature,’from Roman bronzes to laser-scanned mice on a Prague building.”
—Shelf Awareness

“Born out of Lorna Owen's Mouse Interrupted blog, which since February 2012 has tracked the unpresuming mammal's appearances in literature and art, Mouse Muse highlights work from the first century to the 21st.”
—Publishers Weekly's “Museum-worthy images at coffee-table prices”