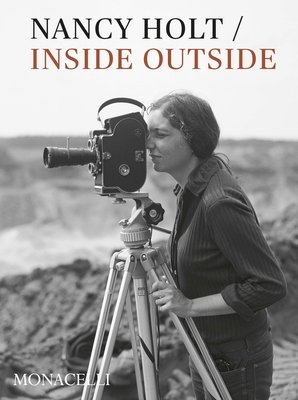 Nancy Holt (1938–2014) was a member of the Earth, Land, and Conceptual Art movements. A pioneer of site-specific installation and the moving image, Holt recalibrated the limits of art. She expanded the places where art could be found and embraced the new media of her time. Across five decades she asked questions about how we might understand our place in the world, investigating perception, systems, and place. Holt’s rich artistic output spanned concrete poetry, audioworks, film and video, photography, slideworks, ephemeral gestures, drawings, room-sized installations, earthworks, artists’ books, and public sculpture commissions.
Born in Worcester, Mass., she grew up in New Jersey and graduated with a degree in biology from Tufts University in 1960. Later that year she moved to New York City where she met the artist Robert Smithson; the two were married in 1963. Holt’s work is held in major collections including Museum of Modern Art, New York; Museum für Gegenswartkunst, Germany; Utah Museum of Fine Arts; and Whitney Museum of American Art, New York. In 2018 Sun Tunnels and Holes of Light were acquired by Dia Art Foundation, with support from Holt/Smithson Foundation.
Lisa Le Feuvre is the inaugural Executive Director of Holt/Smithson Foundation. Committed to communicating and testing ideas, she has curated exhibitions in museums and galleries across Europe, published writings in international publications and journals, and has played a pivotal role in shaping academic and arts organizations, including as the head of the Henry Moore Institute (2010–17).
Katarina Pierre is director of the Bildmuseet at Umeå University, Sweden. She holds a Master of Arts in Contemporary Art Theory from Goldsmith´s College in London, UK. She has worked at Bildmuseet since 1995, where she has overseen highly acclaimed exhibitions by artists such as Walid Raad, Sara Jordenö, Zineb Seidram, Florian Zeyfang, and Isaac Julien.

An in-depth exploration of the pathbreaking works of one of the founding practitioners of Land Art, Nancy Holt, to accompany an exhibition at Bildmuseet, Umeå, Sweden.

A publication coinciding with an exhibition in June 2022, Nancy Holt: Inside/Outside presents the artist’s key experiments across more than fifty artworks, some never before exhibited and many not seen in public for decades. Spanning concrete poetry, drawings, earthworks (represented by drawings and photographs), photography, film, architectural installations, sculpture, and audio-works, Nancy Holt: Inside/Outside details the unique and important contributions Holt made to artistic practice in categories long dominated by the reputations of high-profile male artists.

An artist whose installations, like many of her Land Art peers, were ambitiously outgrowing the “white cube” gallery scene both in concept and scale, Holt eventually situated her works onto a variety of outdoor field settings. Independently and as a collaborator to her husband, the artist Robert Smithson, she explored the boundaries of perception in both formal interior and natural settings. Rigorous documentation of Holt’s work, including research models and drawings for her most famous Land Art work, Sun Tunnels (1976), as well as contributions by key scholars, bring Holt’s work into fuller context. The first publication by the Holt/Smithson Foundation, formed in 2018 to preserve and extend the work of these key artists, Nancy Holt: Inside/Outside will serve as a major contribution to the critical ongoing research into women artists and the American Land Art movement.