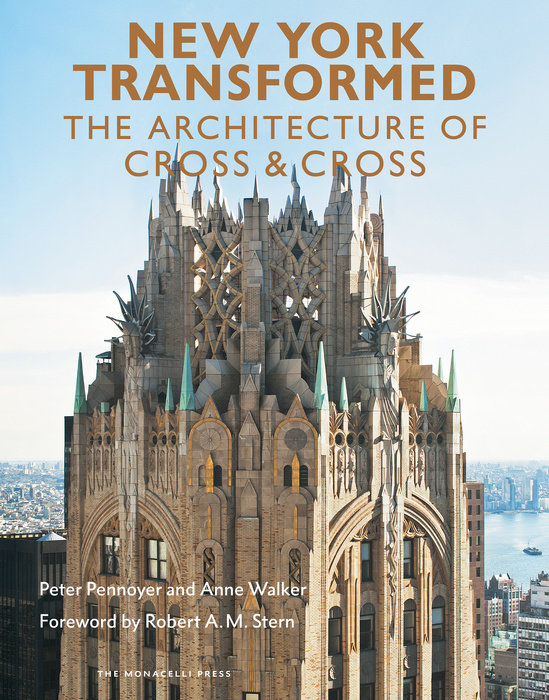 Peter Pennoyer is the founding partner of Peter Pennoyer Architects, which has produced award-winning projects worldwide in classical and traditional styles. The firm is one of Architectural Digest’s AD 100 list of top architects and designers. He serves as the chairman of the Institute of Classical Architecture & Art and as a trustee of the Morgan Library & Museum.

Anne Walker is an architectural historian with Peter Pennoyer Architects. She has worked with Pennoyer on three earlier monographs, covering the work of the firms Delano & Aldrich, Warren & Wetmore, and Grosvenor Atterbury.

The Architecture of Cross & Cross

The architects Cross & Cross shaped the streetscape and skyline of New York City in the 1920s and 1930s with Upper East Side townhouses and apartment buildings, the RCA Victor Building, and Tiffany’s flagship store on 57th Street.

Working through a period of American history that saw dramatic change, from luxurious apartment buildings during the economic boom of the 1920s, to federal commissions during the Depression, the brothers John and Eliot Cross were masters of their craft. Well-connected society men who also showed remarkable foresight in business, Cross & Cross supported their practice with a partnered real estate firm and played a vital role in residential developments like Sutton Place along the East River.

Cross & Cross oversaw the development of handsome clubs and houses throughout New York City, including the Links Club and the Upper East Side houses of Lewis Spencer Morris and George Whitney. They designed country houses in exclusive residential pockets outside New York—the Southampton estate of Winterthur founder Henry Francis du Pont; houses on the North Shore of Long Island, and in Greenwich, Connecticut; the childhood home of Sister Parish in Far Hills, New Jersey; and the Shelburne, Vermont home of J. Watson and Electra Webb.

In this first book to collect the achievements of Cross & Cross, Peter Pennoyer and Anne Walker present a comprehensive monograph of the firm’s work, with more than 300 illustrations both historic and new and a catalogue raisonné of their projects.

“Eliot and John W. Cross were the perfect patrician designers. They put their Ivy League and Beaux-Arts connections into play in 1907, and quickly gained a practice in discreet townhouses, clubs, country houses and jewel-like banks. But the sumptuous illustrations also show an unexpected aspect of their career in the late 1920s, as they developed a specialty of flashy skyscrapers in devoutly modernistic style. The photographer for the book, Jonathan Wallen, took spectacular close-ups of the spiky, vibrating tower [the RCA Victor building] that show things you’d never imagine from the street: incised brickwork, explosive medallions, chevrons and stylized, masklike faces. The RCA Victor building gives the Chrysler Building a run for its money.” —The New York Times

“Visitors snap photos of Tiffany's windows on New York's Fifth Avenue every day, but how many look up at the dignified 1940 building that rises above? The office towers, banks, luxury apartment houses, and country estates built by architect brothers John Walter and Eliot Cross hide in plain sight, frequently upstaged by showier modernist neighbors. New York Transformed draws the spotlight back to the work of these forgotten masters, from Mayfields, an idyllic 1921 New Jersey mansion that became the home of future designer Sister Parish (who termed the house 'perfection'), to the 'great symmetrical palazzo' of One Sutton Place South in Manhattan (1926). Proof that these traditionalists had a wild side can be found the fantastical gothic effigies atop their 1931 General Electric skyscraper.” —Elle Decor

“Architect brothers John and Eliot Cross helped forge the Manhattan skyline we know and love today. If you've ever stepped into Tiffany & Co. on Fifth Avenue, you've been in one of the Crosses' stately structures. This is a beautiful survey of the brothers' work.” —Traditional Home

“Before New York was a city of international billionaires hiding ill-gotten gains in spindly glass towers, it was the skyscraper capital of the world, a city striving to reach high and scratch an indelible image of its ambition, worldliness, and cultural solidity right onto the sky. In New York Transformed, Peter Pennoyer and Anne Walker make tangible the energy and verve of the moment when the patrician architect-developers Cross & Cross helped create that magical, magnetic Metropolis. Imbued with a keen understanding of the links between feeling and building, identity and masonry, the wants of mere men and the needs of mankind, their latest book is as important as it is compelling.” —Michael Gross, author of 740 Park and House of Outrageous Fortune

“Pennoyer and Walker bring the versatile Cross Brothers to life and shine a spotlight on their many handsome—sometimes dramatic—New York buildings. Many may know them from the dazzling GE Building on Lexington Avenue. But I was surprised that so many of my other favorites, from City Bank Farmers Trust Company and 41 Broad in Lower Manhattan, to the Links Club and Tiffany's, were Cross and Cross designed. What a welcome addition to any architecture buff's library.”
—Peg Breen, President, The New York Landmarks Conservancy

“What a delightful surprise! A practicing architect who's not only interested in history but writes it. Architect Peter Pennoyer and historian Anne Walker's new book on Cross and Cross resuscitates an architectural firm that strode the fertile territory between the traditional and the modern, providing a valuable lesson for architects today.”
—Donald Albrecht, Curator of Architecture and Design, Museum of the City of New York