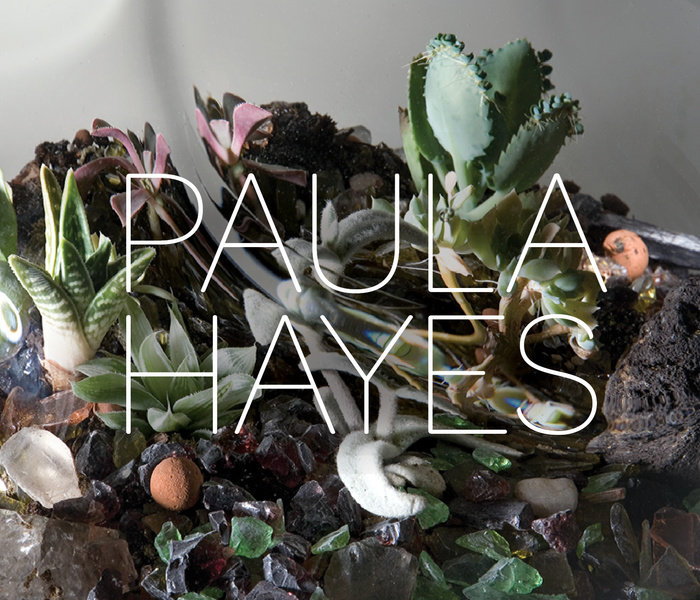 Artist Paula Hayes has participated in over 65 group exhibitions since 1990, and has been the subject of over 15 solo exhibitions at prestigious institutions and galleries such as the Museum of Contemporary Art in Los Angeles, the Marianne Boesky Gallery, Jeanne Greenburg-Rohatyn's Salon 94, and, most recently, the Museum of Modern Art in New York. She has received wide critical acclaim from prominent art publications such as Art in America, Artforum, Sculpture Magazine, the New Art Examiner, and from critics including Barry Schwabsky. Hayes lectures widely and believes strongly in sharing her knowledge with future generations of artists. She has been a visiting instructor at Skidmore College, the School of Visual Arts, the Cooper Union, the University of Wisconsin, Middlebury College, New York University, and the Cranbrook Academy of Art, among others. Hayes recently developed a line of Living Necklaces—air plants that can be worn as jewelry, which are sold at the Cooper-Hewitt National Design Museum. She designed new gardens for the W Hotel in South Beach, Florida, and launched a line of biomorphic-shaped tableware in May 2010.

Richard D. Marshall is the curator of the Lever House Art Collection in New York, as well as an art consultant and art historian. A curator at the Whitney Museum of American Art for twenty years, he has also written widely on art. His most recent books include Ed Ruscha (2005), Jack Pierson: Desire Despair (2006), Georgia O’Keeffe: Nature and Abstraction (2007), Kenny Scharf (2009), and Joan Mitchell: The Last Decade (2010).

Artist Paula Hayes is most famous for her exquisite, high-end art terrariums of organically shaped, handblown glass, but her affinity for all things green extends to full gardens as well. She has created over twenty full gardens for private clients around the country. This volume, the first monograph on her work, is structured in a two-part format that devotes equal attention to both.

A fixture of the New York art scene for over twenty years, Paula Hayes’s popularity among art collectors and the public has swelled dramatically over the past few. Her installation in the lobby of MoMA, Nocturne of the Limax Maximus, garnered much critical acclaim and landed her a feature on CBS Sunday Morning.

She installed an oversized terrarium in the lobby of Lever House in New York City, and a solo exhibition on her work was held at the Wexler Art Center in Columbus, Ohio, where she also installed a permanent garden adjacent to the museum’s main entrance.