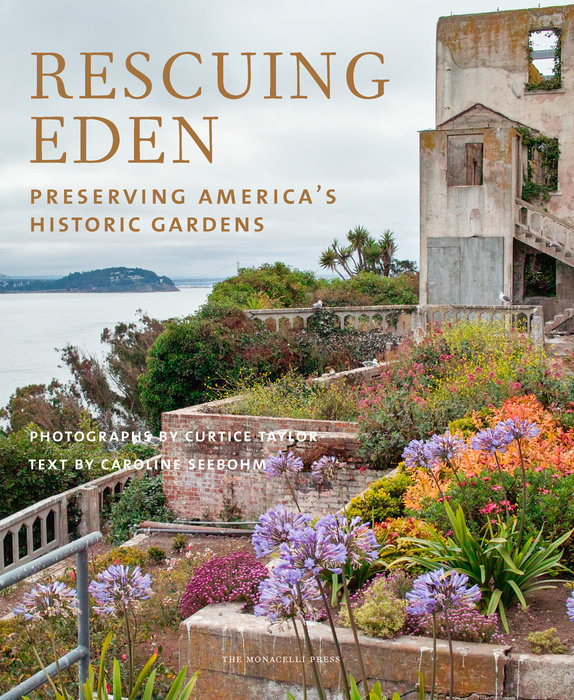 Caroline Seebohm is a design historian and biographer. A prolific author, her books include Boca Rococo, a biography of Palm Beach architect Addison Mizner, At Home with Books, and Cottages and Mansions of the Jersey Shore, as well as biographies of Marietta Tree, Conde Nast, and tennis legend Pancho Segura.

Curtice Tayor is a well-known landscape and garden photographer whose work is widely published. He teaches photography at the School of Visual Arts in New York.

From simple 18th- and early 19th-century gardens to the lavish estates of the Gilded Age, the gardens started by 1930s inmates at Alcatraz in San Francisco Bay to the centuries-old camellias at Middleton Place near Charleston, South Carolina—Rescuing Eden celebrates the history of garden design in the United States, with 28 examples that have been saved by ardent conservationists and generous private owners, and opened to the public.

The United States has a rich tradition of landscape design, with gardens on a scale that rivaled the great gardens of Europe, but in the absence of specific institutions dedicated to their preservation, many of these “ephemeral collaborations between man and nature” were lost—during the wars, economic depressions, and social upheavals that swept the country in the mid-20th-century, or to creeping development and urban sprawl. The surviving gardens presented here were selected for the drama of their original creation and rescue and for their historical and horticultural importance. Ranging from wonderful to woebegone, each has its own character, and each has been brought back from the brink through a combination of imagination and tenacity.

Discover The Kampong in Miami, Florida, planted with hundreds of tropical rarities from Southeast Asia by legendary plant explorer Dr. David Fairchild; Barnsley Gardens in Georgia, one of the few antebellum gardens surviving in the South, planted with 200 varieties of roses; the Lynchburg, Virginia garden created by Harlem Renaissance poet and civil rights activist Anne Spencer; the eccentric Ladew Topiary Gardens, with 15 garden rooms and a topiary foxhunt; the Belle Epoque grandeur of the Untermyer Garden in Yonkers, New York; and many others across the country, in Kentucky, Texas, Michigan, Maine, Rhode Island, and California. Each garden has been specially photographed by noted landscape and garden photographer Curtice Taylor, and introduced with authoritative and engaging text from design historian Caroline Seebohm, encouraging readers to appreciate the landscapes that serve not only as windows on American history, but living, flourishing pleasure grounds for botanists, horticulturalists, and nature lovers throughout the United States.

"If ever there was a sign of how gardens can offer hope, it must be the ‘dazzling array of blooming borders’ developed in the 1930s at the notorious Alcatraz prison in San Francisco, where an inmate wrote that tilling and planting the hillside became his ‘refuge’ and ‘release’. But like many of the gardens photographed so enthrallingly by Curtice Taylor in this book, its glories quickly turned to weeds when it closed in 1963. Curtice writes movingly of how his career was launched when Russell Page asked him to document a deeply loved private garden that was subsequently razed. Haunted by the loss, he became intrigued by other gardens that had been saved. Caroline Seebohm’s narratives, involving the creation, loss and rediscovery of 30 gardens, are peopled with painters, poets, opera singers, civil rights activists and heroic widows, making for an irresistible mix. And what encouragement for designers to find out how ingeniously and passionately people fought to preserve these landscapes, many of which reflect English tradition. Even the flora of Alcatraz has now been replanted. Where gardens are concerned, the act of rescue is usually reciprocal."
—Garden Design Journal

"Arranged chronologically, from Colonial days and the Gilded Age to the best of contemporary gardens, Rescuing Eden features the famous historic examples, such as Middleton Place, as well as newer ones that are not so well known outside this country."
—Hortus

"Lacking a substantial conservation organization, such as England’s National Trust, many of America’s greatest gardens are threatened in various ways: the death of owners, encroaching developers, etc. This beautiful book by design historian Caroline Seebohm profiles 30 gardens that are being preserved, either by local citizens groups or through generous donations. Lavishly illustrated with images by garden photographer Curtice Taylor, this beautifully produced book will appeal to gardeners and preservationists."
—Library Journal