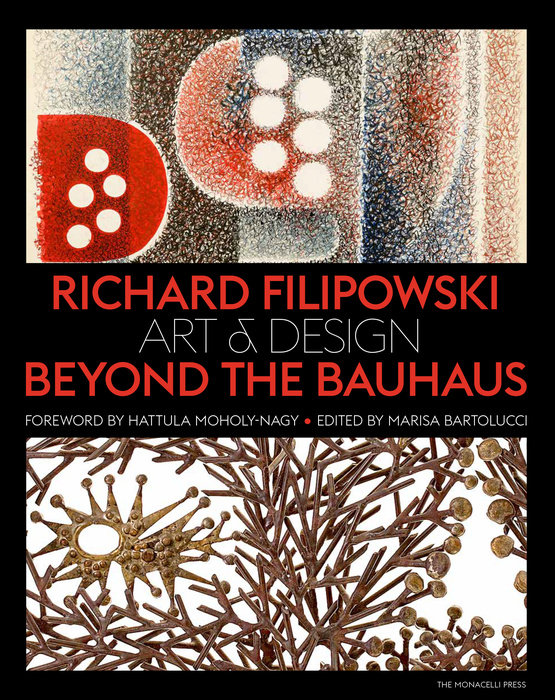 Marisa Bartolucci is a veteran design journalist, editor, and author. Her father, the late industrial designer Edgar Bartolucci, was a classmate of Richard Filipowski at the School of Design in Chicago. She is the author of Living Large in Small Spaces (Abrams), coauthor of Contemporary American Furniture (Universe), and conceived and edited Compact Design Portfolio, a series of ten monographs on modern and contemporary masters (Chronicle Books). Bartolucci currently contributes to Introspective, the online magazine of 1stdibs, as well as Interior Design, Modern, The Magazine Antiques, Sotheby's and Wallpaper. She lives in New York City.

Hattula Moholy-Nagy is the executrix of the Moholy-Nagy estate and cofounder of The Moholy-Nagy Foundation with her sons, Andreas and Daniel Hug. She is a Mesoamerican archaeologist by profession. She lives in Ann Arbor, Michigan.

Art and Design Beyond the Bauhaus

In this, the first monograph of Richard Filipowski, a major figure bridging the Bauhaus and American midcentury modernism finally gets his due.

Richard Filipowski (1923-2008) was among the most gifted polymaths in the annals of American modernism. Whether as a painter, sculptor, or designer of furniture and jewelry, Filipowski developed a lush, abstract, and amazingly consistent visual language that marks him among the finest figures of midcentury art and design.
As a student at the Institute of Design (formerly the New Bauhaus) in Chicago, he quickly became a protégé of founder László Moholy-Nagy, who featured several of Filipowski’s works in his seminal text Vision in Motion (1947); Filipowski was the only student Moholy-Nagy called upon to join the faculty, where he taught alongside Walter Gropius and Marcel Breuer. Recruited by Gropius to develop a course in design fundamentals at Harvard, which remains a cornerstone of design pedagogy to this day, he would move to MIT where he taught for more than three decades, until his retirement in 1988.
With a foreword by László Moholy-Nagy’s daughter Hattula, Richard Filipowski: Art and Design Beyond the Bauhaus is the first monograph of this master, who over the course of his career created a unique body of work in diverse media that has largely, until recently, been held in private collections due to his relative lack of compulsion to seek media attention or worldly rewards. But now through the efforts of the Filipowski family and new attention by design scholars–several of whom contribute essays here on Filipowski’s graphic and painted works, sculpture, furniture, and position in design history–the work is being revealed to a new generation of aficionados. Richard Filipowski is a rich document of a life and career that is poised to reenter the canon of modernism.

"Beautifully illustrated with images of "Filip's" paintings, sculpture, furniture, jewelry, drawings, and other objects, this new work does much in the way of recognizing and highlighting the importance of the artist's achievements and helping a new generation learn of his contributions. VERDICT Highly recommended..."
—Library Journal

“It should not take long for this mid-century artist and designer to take his place in the American modernist canon, and a new book will only hasten the process. Richard Filipowski: Art & Design Beyond the Bauhaus, a handsome volume edited by Marisa Bartolucci, tells Filipowski’s story through scholarly essays and hundreds of photographs of his work.”
—Gregory Cerio, MODERN magazine

"In this new book, editor Marisa Bartolucci provides a review of Mr. Filipowski's evolution as a person and artist, as told in essays penned by various designers and artists. Glorious photographs (many full-page photos) share space with the essays, showcasing Mr. Filipowski's creativity. It's a fascinating approach to learning about the man, known as 'Filip' among friends and colleagues, who not only created art but also taught and inspired students."
—Antoinette Rahn, Antique Trader