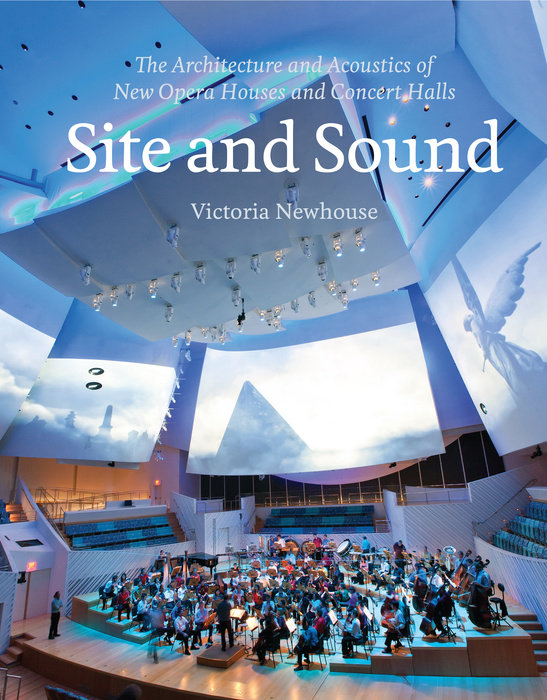 Victoria Newhouse is an architectural historian. She lectures frequently and her articles have appeared in The New York Times, Architectural Record, Architectural Digest, and ArtNews. Her previous books include Wallace K. Harrison, Architect; Towards a New Museum; and Art and the Power of Placement.

The Architecture and Acoustics of New Opera Houses and Concert Halls

Victoria Newhouse, noted author and architectural historian, addresses the aesthetics and acoustics in concert halls and opera houses of the past, present, and future in this stunning companion to the highly regarded Towards a New Museum. Site and Sound explores the daunting, perennial question: Does the music serve the space, or the other way around?

Heavily illustrated throughout—with historic images, spectular color photographs, detailed drawings—this volume is an informed and enjoyable presentation of a building type that is at the heart of cities small and large.

Newhouse starts with a survey of venues from ancient Greek and Roman times and progresses to contemporary works around the world. She singles out Lincoln Center in particular for its long history and its transitions and remodelings over the years. Two major chapters cover the present: one focuses on recent work in the West, including the National Opera House of Norway in Oslo by Snøhetta (2008), the Casa da Música in Porto, Portugal, by Rem Koolhaas (2005), and many more; the second examines the boom in concert halls in China. A final chapter looks at projects that are currently planned and the future of an architecture for music.

Praise for Site and Sound

"Site and Sound, which emerged from four years of research and travel, will be a crucial resource for anyone assessing the state of the hall-building art: I was particularly fascinated by the overview of all the frenzied recent activity in China." —Alex Ross, author of The Rest is Noise and Listen to This

"An ambitious history and critique that covers everything from the amphitheater at Epidaurus (third century B.C.) to Zaha Hadid's cutting-edge Cultural Center in Baku, Azerbaijan, which is under construction now. But the emphasis of this precisely written, meticulously researched study is on the most recent work. And there are some fascinating stories behind the more celebrated examples.... What concerns [Newhouse] most is the connection between the visual and the aural, the relationship of the art of design to the act of listening, a synthesis that can take us into the sublime, one of the most complex and powerful experiences that architecture can provide.... Because she understands the nature and necessity of social, technological and architectural change, she goes beyond conventional architectural criticism and acoustical analysis to outspoken criticism of the results. And she has come to some surprising conclusions."
—Ada Louise Huxtable, Wall Street Journal

"[M]ore fun than any niche-audience, coffee-table-ish architecture book has a right to be.... the book escapes the orbit of the typical typological survey partly through the charm and novelty of its subject, and partly through Newhouse’s own brisk approach through the earliest amphitheaters of the ancient Greeks, the grand spaces of the Renaissance and of the 19th century, to the forward-thinking and acoustically fine-tuned halls of today. It’s suprising that no comparable treatment of opera houses has been written before.... The pleasure of Site and Sound as a whole is how adroitly Newhouse navigates the dual audience—the opera buff on the one hand, the design fanatic on the other—with enough eye candy, backstage gossip, and techno–shop talk to sustain the interest of both." —Surface magazine

"In this meticulously researched and sumptuously illustrated volume, Newhouse, an architectural historian... goes on a global tour of new musical structures, giving particular attention to frenetic recent activity in China. Along the way, she quizzes architects, acousticians, and musicians about an art whose fundamental principles have yet to be understood." —The New Yorker


Praise for Towards a New Museum:

"Towards a New Museum [is] about as complete a tour of the horizon of important new buildings as you are likely to find.... Ms. Newhouse is not just an astute and tireless visitor to these and many other places, but a trenchant critic and observer." —The Wall Street Journal

"Reading through these pages is to be engaged in a provocative conversation with passionate, very intelligent people." —The New York Times Book Review