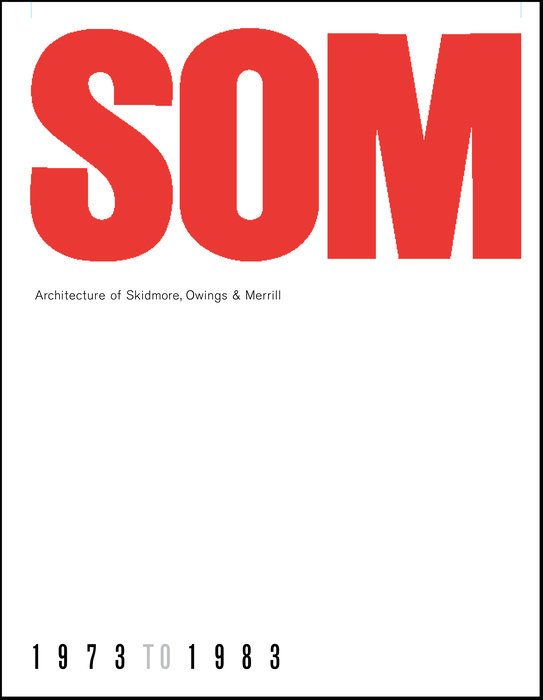 Albert Bush-Brown was an architectural historian and coauthor of The Architecture of America: A Social and Cultural History.

Skidmore, Owings & Merrill, founded in 1936, is one of the largest and most influential architecture firms in the world. SOM has long been known for innovation, experimentation, design excellence, and technical mastery, for an abiding interest in the contributions that buildings can make to the life of cities, and for a collaborative approach that extends to all aspects of the design and construction processes. This volume, which presents work from the 1970s and early 1980s, reproduces a monograph first published in 1983.

SOM’s growth as a large architectural firm began almost fifty years ago. By 1981 there were nine offices in the United States with a total of more than 2,100 members. The decade 1973–1983 brought retirement to a number of well-known founding partners. Nevertheless, SOM’s reputation for design leadership has been maintained through “creative dissidence,” as one of the younger partners describes it. The firm moves with distinction into a third and fourth generation. This book, organized by region, reveals the firm’s architectural response to a decade that greatly changed American society.

The firm’s work of the past decade belonged to the city, and especially the urban office tower. Architectural restraints, new technology and programs created opportunity for a new generation of distinctive towers that have become important additions to the skylines of major American cities. The tall building has evolved to new purposes, and the result has been expanding variations on tower architecture. The late Chicago partner Fazlur Khan, who led the way by creating the flexible, economical tube structure, was enthusiastic about the tall building, claiming “it permits work and residential space to locate where and when most needed.” The tall building, for him, was a remarkable economical and symbolic success which also performed an admirable social service.

The decade was also defined by wide public interest in preservation of historic buildings and contexts. To this movement, SOM’s designers did not react with historical quotation or eclectic reference, but rather by accepting the contextual obligation as part of their more urgent quest for a strong architecture that is both modern and compatible with its setting. SOM addressed important urban problems with seminal studies for San Antonio, Chicago, and Washington, as well as with designs for large urban transportation facilities on the East Coast.

At the same time, the firm sought work abroad in the face of a barren domestic economy, designing universities, new towns, airport terminals, and commercial buildings on several continents. Whereas regret surrounds plans for Iranian cities halted by political revolt, planning projects of this kind introduced the firm’s teams to social urgency and primary research into indigenous form.

The energy crisis brought still other challenges. Its special requirements created new architectural opportunities that have been demonstrated by buildings in a variety of locations. SOM early recognized the potential of computer analysis and pioneered its adoption in dealing with structural and architectural problems. This capability dramatically extended SOM’s capacity for the creative study of energy efficiency and performance calculations.