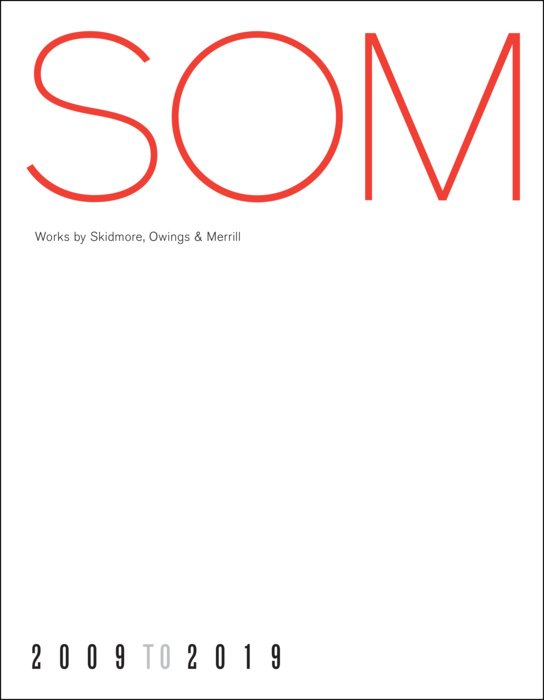 SOM is a collective of architects, designers, engineers and planners responsible for some of the world's most technically and environmentally advanced buildings and significant public spaces. Collaborative, interdisciplinary, and international, SOM works from a network of creative studios across the globe.

Sam Lubell is a writer based in New York. He has written ten books about architecture for Phaidon, Rizzoli, Metropolis Books, Monacelli Press and Oro Editions. He writes for The New York Times, The Los Angeles Times, Architectural Digest, Wallpaper, Dwell, Metropolis, and other publications. He co-curated the exhibition Never Built New York, at the Queens Museum, and Never Built Los Angeles at the A+D Architecture and Design Museum.

Legendary architecture practice SOM presents 40+ of their most transformative works in the sixth and latest volume, SOM: Works by Skidmore, Owings & Merrill, 2009-2019.

Skidmore, Owings & Merrill (SOM) is one of the most influential architecture studios in the world, with a body of work that includes some of the most important buildings and urban designs of our time. SOM: Works by Skidmore, Owings & Merrill, 2009-2019 is the sixth and latest volume in the series to cover every era of SOM’s history, from the iconic Modernist works of the 1950s to the projects of today.

Documenting SOM’s global body of work—which ranges from a prototype for a biophilic breathing wall to the new headquarters for NATO in Brussels—SOM: Works by Skidmore, Owings & Merrill, 2009-2019 demonstrates how SOM has come to hold its unparalleled position as a steward of international architecture. This new volume details SOM’s approach to designing impactful, complex projects in a globalized world—an approach which marries a deep bench of global expertise with a commitment to honoring culture and people in the communities where SOM works.

In this volume, explore SOM’s mission to address the most urgent challenge of our time: climate change. Working in pursuit of a zero-carbon built world, SOM’s designers are pioneering new approaches to adaptive reuse, cultivating emerging technologies including machine learning, inventing new tools to optimize building performance, and beyond.

Through in-depth essays, architecture writer and critic Sam Lubell dives into SOM’s radically rigorous approach to design in today’s complex world, exploring the unique ideas cultivated within the studio and how those ideas are transformed into transformative spaces across the globe. As with the previous five volumes in the series, renowned design studio Pentagram led the book’s design in collaboration with SOM. Featuring 500 images, the book includes thorough profiles and never-before-published photographs, plans, and drawings of the studio’s most recent works.

“The latest monograph exploring some of the firm’s most transformative work.”
—designboom