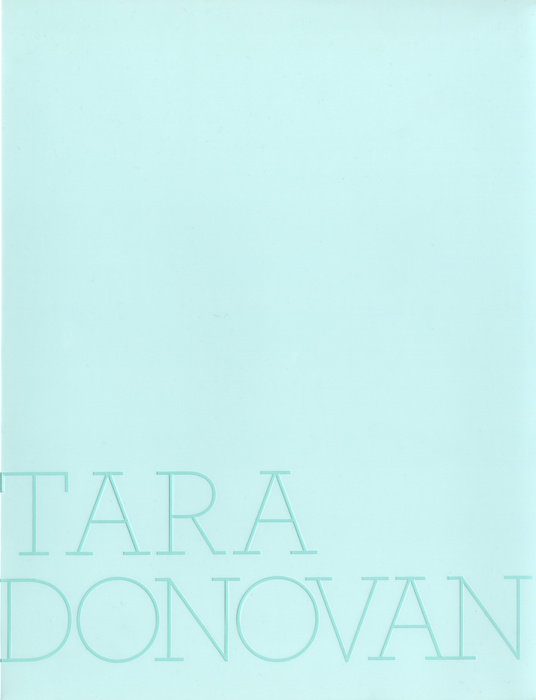 Tara Donovan, recipient of a 2008 MacArthur Foundation "Genius Award," was born in 1969 in New York City. She studied at the School of Visual Arts, New York; Corcoran College of Art and Design, Washington, D.C.; and Virginia Commonwealth University, Richmond. She has received solo exhibitions at the Metropolitan Museum of Art, New York; the Museum of Contemporary Art, San Diego; and numerous museums and galleries. Her work has been included in group exhibitions in New York, Boston, Chicago, Dallas, Los Angeles, and London, among other cities nationally and internationally.

Nicholas Baume is chief curator at the ICA, Boston. He has organized exhibitions on the work of Kai Althoff, Kader Attia, Carol Bove, Thomas Hirschhorn, Lucy McKenzie, and Anish Kapoor.

Jen Mergel is associate curator at the ICA, Boston.

Lawrence Weschler, a staff writer at the New Yorker for over twenty years, is director of the New York Institute for the Humanities at New York University and artistic director of the Chicago Humanities Festival. His books include Seeing Is Forgetting the Name of the Thing One Sees, Mr. Wilson's Cabinet of Wonder, and the forthcoming True to Life, which encompasses twenty-five years of conversation with David Hockney.

Artist Tara Donovan uses commonplace consumer materials–toothpicks, tape, pencils, buttons, paper plates, and the like–to create her dazzling sculptural installations. Often biomorphic or topographical in character, her large-scale abstract works utilize systematic arrangements of thousands or even millions of units. Visually evocative and perceptually seductive, her pieces are at once organic and highly structured. Donovan has been recognized for her commitment to process and her ability to discover how the inherent physical characteristics of an object might allow it to be transformed into art.

Published in conjunction with a major solo exhibition at the Institute for Contemporary Art/Boston, this book is the first to document Donovan’s complete oeuvre, from her beginnings working in ink to her most recent pieces. Among the many works shown are Untitled (Plastic Cups), a 50-by-60-foot landscape of plastic cups; Haze, a 42-foot-long wall of over two million clear plastic drinking straws stacked like wood; and her three 40-inch cubes, one of steel pins, one of toothpicks, and one of shattered glass. An in-depth conversation between Donovan and Lawrence Weschler traces the artist’s schooling, early career, and current work.

“This singular artist is creating a dazzling body of work that will enrich the fields of contemporary sculpture and installation art for years to come.”
—The John D. and Catherine T. MacArthur Foundation

“Ms. Donovan [has the] ability to uncover unexpected qualities in the most commonplace materials and objects.”
—Carol Kino, “The Genius of Little Things,” The New York Times

“The work has the pragmatic rigor of that earlier American period [of Minimalism] . . . but it brings it into our own period by suggesting digital, cellular, emergent networks. It seems to speak to the systems that are shaping our lives.”
—Nicholas Baume, chief curator of the Institute of Contemporary Art, Boston, as quoted in The New York Times