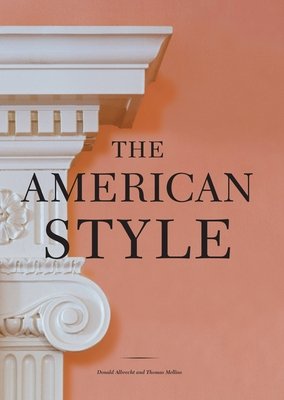 DONALD ALBRECHT is the curator of architecture and design at the Museum of the City of New York and a leading expert on twentieth-century architecture and design. He is the editor of Paris/New York: Design/Fashion/Culture/ 1925-1940 and Eero Saarinen: Shaping the Future and co-author of Only in New York: Photographs from Look Magazine.

THOMAS MELLINS is an independent curator and architectural historian. His recent publications include Only in New York: Photographs from Look Magazine, and he is the co-author, with Robert A. M. Stern, of New York 1880, New York 1930, and New York 1960.

Easily the most recognizable architectural style in America, with its brick or shingled facades trimmed in white and ornamented with restrained classical detail, the Colonial Revival emerged in the late nineteenth century and is still the basis for classical design today. The American Style surveys the evolution of the Colonial Revival from the 1890s to the present, focusing on the period from 1900 to the 1930s when New York City was a major center of architecture and decorative arts. Leading architects, including McKim Mead & White, Delano & Aldrich, and Mott B. Schmidt, used its vocabulary for private residences and clubs as well as institutional buildings—banks, schools, churches, and museums.

Richly illustrated with archival photographs and objects from the collections of the Museum of the City of New York and other major institutions, The American Style will be the definitive record of an enduring aesthetic in architecture and decorative arts.

Praise for The American Style

"The colonial revival remains the most American of all expressions and is ubiquitous in today's culture. This book expands considerably on the subject. In addition to sections on architecture and decorative arts, there is one on 'Ballyhoo' or materials such as publications, stage sets, exhbitions, costumes, and miscellany. This is a book central to any historian's attempt to understand American material culture . . . it opens many new possibilities for study and research." —Richard Guy Wilson, Winterthur Portfolio