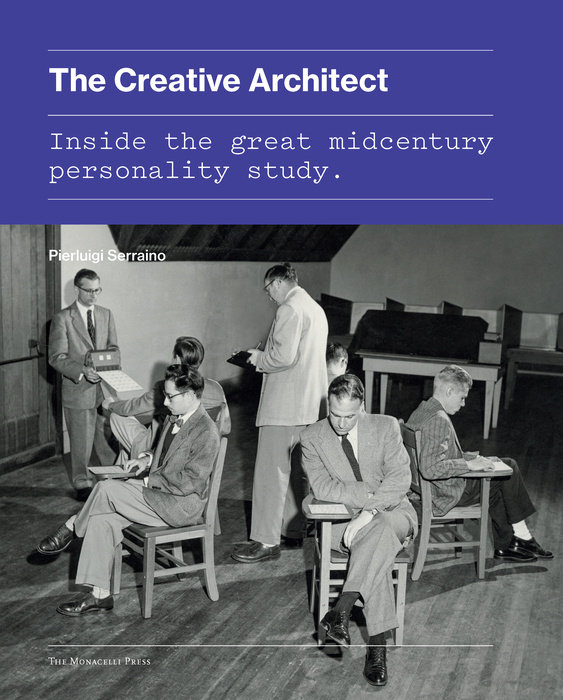 Pierluigi Serraino, AIA, is an architect, author, and educator. His work and writings have been published in professional and scholarly journals such as Architectural Record, Architecture California, the Journal of Architectural Education, and Architectural Design (UK). He has authored and contributed to several books, among them Modernism Rediscovered (Taschen, 2000), Eero Saarinen (Taschen, 2005), and NorCalMod: Icons of Northern California Modernism (Chronicle Books, 2006).

Inside the Great Midcentury Personality Study

The story behind a little-known episode in the annals of modern architecture and psychology—a 1950s creativity study of the top architects of the day, including Eero Saarinen, I.M. Pei, Philip Johnson, Louis Kahn, Richard Neutra, George Nelson, and dozens more—is now published for the first time.

The story of midcentury architecture in America is dominated by outsized figures who were universally acknowledged as creative geniuses. Yet virtually unheard of is this intensive 1958–59 study, conducted at the Institute of Personality Assessment and Research at the University of California, Berkeley, that scrutinized these famous architects in an effort to map their minds. Deploying an array of tests reflecting current psychological theories, the investigation sought to answer questions that still apply to creative practice today: What makes a person creative? What are the biographical conditions and personality traits necessary to actualize that potential?

The study’s findings have been gathered through numerous original sources, including questionnaires, aptitude tests, and interview transcripts, revealing how these great architects evaluated their own creativity and that of their peers. In The Creative Architect, Pierluigi Serraino charts the development, implementation, and findings of this historic study, producing the first look at a fascinating and forgotten moment in architecture, psychology, and American history.

Praise for The Creative Architect

"...a delicious bit of reading and a fascinating snapshot of a moment in time.... In Serraino's telling, great architects are really true to themselves, burning with an inner sense of destiny and the rightness of their cause. But he avoids Ayn Randian cliches about the omnipotent designer, preferring to situate architectural creativity within a midcentury context. He does so convincingly."
—James McCown, Architecture Boston

"What makes someone creative? The same question fascinates Pierluigi Serraino, an Italian-American architect practising in San Francisco whose book, The Creative Architect: Inside the Great Midcentury Personality Study, has refocused attention on that now almost forgotten UC Berkeley study. The 1950s study's research, findings and conclusions about creativity will still strike a chord today, just as they did when they were first released from 1959 onwards to an attentive American public, drawn by the many big names involved."
—Shelley Gare, Australian Financial Review

“Ever wonder what the secret sauce is for a successful creative career? You’d be far from the first. In The Creative Architect, author Pierluigi Serraino chronicles the little-known research project—and this confluence of psychological inquiry and the world of design.”
—Curbed, The best architecture and design books of 2016

“Serraino delves into the finer details of the study, down to the original handwritten questionnaires, to reveal the inner workings of the creative mind and the equally fascinating meta-creativity of designing and implementing this enormously inventive, daring, influential, and still unparalleled study.”
—Maria Popova, Brain Pickings

“What does the OSS, the precursor to the CIA, have to do with midcentury architects and the creative process? Serraino explores the goals and findings of this mysterious, never before-published project.”
—Frances Anderton, DnA's 6 Most Intriguing Books of 2016

“What finally makes The Creative Architect so compelling is the fact that so many of these gifted introverts traveled to Berkeley in the first place, hungry to meet their peers and curious, in a larger sense, about who they were and what in the world they were doing. ‘Very interesting,’ wrote Saarinen in his evaluation of the weekend. ‘Wonderful for the ego!’”
—Christine Cipriani, The Wall Street Journal

“‘What are the motivations that make people do what they do?’ asks Pierluigi Serraino, a Berkeley-based architect and educator whose book, The Creative Architect, chronicles the IPAR research. The study revealed that each of the celebrated architects had something in their backgrounds that they had to overcome: lack of money, repressive parents, or poor health. ‘To declare in no uncertain terms the core trait of the creative person: The answer is courage,’ Serraino writes.”
—Mimi Zeiger, Architect Magazine

“Over 22 hours of testing, scientists studied the personalities, neuroses, and inner conflicts of architects who are, even today, among the most famous on earth. What resulted was an incredibly intimate, at times uncomfortable, portrait of a group of now-legendary architects. . . . The Creative Architect is a window into another world; one where we can see how the anxieties, personality defects, and fraught childhood dramas can coexist—and even bolster—the creative successes of very flawed humans. Which, even 60 years later, is heartening.”
—Fast Company's Co.Design

“Dusts off the forgotten findings of a study conducted in 1958 and 1959 by the University of California, Berkeley, which sought to map the minds of visionaries such as I. M. Pei, George Nelson, Louis Kahn and about 40 of their contemporaries. Drawing on interview transcripts, aptitude tests and other original sources, Serraino’s intriguing book seeks to answer the question that researchers posed when the studies began: what accounts for artistic greatness? Though it’s impossible to know for sure, this book offers plenty to ponder.”
—Monocle

“Pierluigi Serraino creates a detailed, fascinating account of the forgotten moment in 1959 when 40 preeminent modern architects were summoned to the University of California’s Institute of Personality Assessment and Research for a study that attempted to gauge the nature of creativity. The study featured a three-day barrage of psychological tests and interviews, including the arrangement of tiles, conformity studies, and proto-Meyers-Briggs evaluations. The participants were asked to rank one another’s creative prowess before the study; Philip Johnson, A. Quincy Jones, and Eero Saarinen each ranked themselves first. Interview commentary on Richard Neutra noted that 'he almost literally thinks of himself as superman.' Not all were consumed by hubris; many were identified as nervous and self-effacing, and almost all were labeled colossal introverts. Serraino notes that the study revealed that it is 'much easier to determine the traits of the creative person than... the creative process.' It did identify the subjects’ 'fierce escape from the conformism of thought and belief,' their tendency to perceive problems that others did not, and an unfailing quest to not merely solve problems but solve them elegantly. A highly entertaining look at an unusual event in the history of American architecture.”
—Publishers Weekly

“This fascinating book investigates the long-thought-to-be-apocryphal 1958–59 psychological studies conducted on the nation’s top architects, including Eero Saarinen, Philip Johnson, and Louis Kahn. The examinations, held at the University of California, Berkeley, consisted of interviews and aptitude tests—several of which appear in the book. A ranking table found Richard Neutra to be the “most creative” among the architect subjects, but also placed Johnson in the top five. Which is to say, such metrics are hopelessly spotty.”
—Metropolis

“When I first became interested in Creativity, a psychologist friend told me to start by reading about Donald MacKinnon’s research into creative architects. It was great advice. Now that story is told in full.”
—John Cleese, writer and comedian

“The Creative Architect is a richly textured account of one of the most consequential studies in the field of creativity, and compulsive reading for those of us intrigued by architecture and psychology.”
—Brian Little, author of Me, Myself, and Us: The Science of Personality and the Art of Well-Being

“We now know that childlike wonder, an absence of fear, and strong intuition are key aspects of creativity. The Creative Architect is a thought-provoking and inspiring documentation, richly illustrated with mosaic constructions and drawings made by some of the twentieth-century’s most important architects.”
—Steven Holl, architect