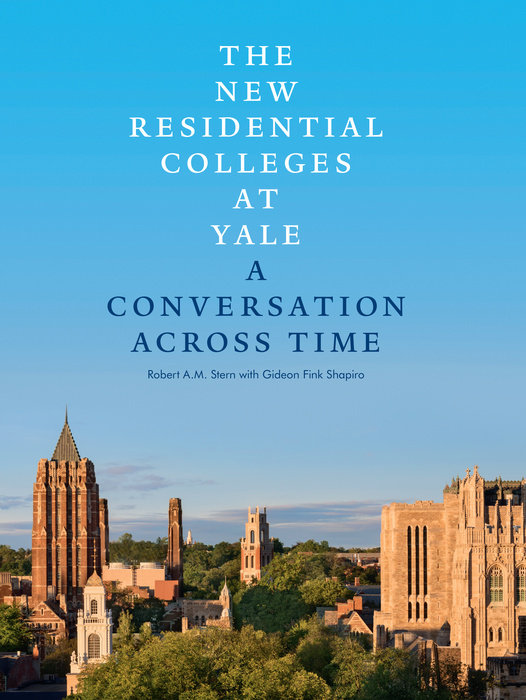 Architect, educator, and architectural historian Robert A.M. Stern is the founding partner of Robert A.M.
Stern Architects. Dean of the Yale School of Architecture from 1998 to 2016, he is co-author of a five-volume history of New York's architecture and urbanism as well as Paradise Planned: The Garden Suburb and the Modern City.

Writer and researcher Gideon Fink Shapiro holds a doctorate in architectural history and theory from the University of Pennsylvania. He has contributed to the Journal of the Society of Architectural Historians, Architect, Domus, the Guggenheim Blog, Next City, and the Architect's Newspaper.

The New Residential Colleges at Yale

A Conversation Across Time

Celebrating Yale’s first new residential colleges in fifty years, The New Residential Colleges at Yale examines the role of the residential college system and the evolution of Yale’s urban campus, presenting an important new chapter in the history of Yale and New Haven.

The residential college system at Yale, modeled after the academic communities at Oxford and Cambridge, is a cornerstone of Yale undergraduate life, breaking down the larger university into smaller, more closely-knit communities. Eight of the original ten residential colleges at Yale were designed by James Gamble Rogers in the 1930s, establishing Collegiate Gothic as the style with which Yale is most closely identified today.

For the two new colleges, Robert A.M. Stern Architects was charged with designing buildings that fit into the residential college system, and in so doing say “Yale,” while bringing twenty-first-century standards of communal living and environmental responsibility to college residential life. The two new colleges, housing 450 students each, are conceived as fraternal twins, similar in size but each enjoying its own identity, each incorporating a dining hall, a library, and a house for the head of the college, and each maintaining the traditional organization of entryways that intentionally create more intimate communities of students within the larger whole. The site will play important role in redefining the overall sense of the Yale campus, serving as it does as a lynchpin between districts identified with the humanities and the sciences, and between the university and adjacent neighborhoods.

Beyond questions of Yale and New Haven, the book contributes to a wider historical and theoretical conversation about the expression of place, time, and identity through architecture. The design of the new colleges exemplifies the challenges and opportunities involved with practicing traditional architecture as a meditation between past and present in a historically sensitive setting. An extensive archive of original drawings, models, material samples, as well as extensive color photography of the completed buildings, illustrates the story.

Praise for The New Residential Colleges at Yale

"Stern, who was dean of the School of Architecture for 18 years, took himself and his firm on a deep dive into Yale’s gothic architecture and its Oxbridge roots in order to design Benjamin Franklin and Pauli Murray Colleges. This lavishly illustrated book documents that process thoroughly with essays, drawings, diagrams, and photographs."
—Yale Alumni Magazine