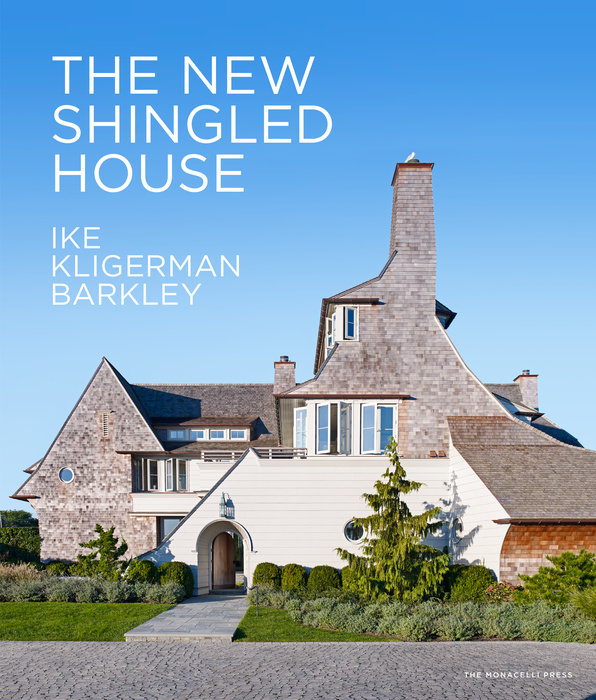 John Ike, Thomas A. Kligerman, and Joel Barkley have been in partnership for twenty-five years. Their firm, Ike Kligerman Barkley, is widely recognized for residential design, both through features in Architectural Digest, Elle Décor, Coastal Living, and other national publications, and through the prestigious Julia Morgan and Stanford White Awards from the Institute of Classical Art and Architecture.

The architectural style of the classic American summer, the shingled house can suggest the beach, the countryside, the mountains, and even the city. AD100 architects Ike Kligerman Barkley, one of the most successful firms practicing in a traditional style today, presents 14 houses that celebrate the simple wood shingle’s infinite flexibility—ranging from richly historic to sculptural and experimental.

The New Shingled House includes examples throughout the fabled seaside resorts of New England—Martha’s Vineyard, Block Island, and the Hamptons—as well as houses in California’s Bay Area and Point Loma, on a pristine mountain lake in South Carolina, and a Scandinavian influenced family residence in Connecticut. All are characterized by a sense of graciousness and generosity that makes them unique spaces for the owners and enviable spaces for readers.

The versatility of the shingle style allows the designers to explore formal ideas and to respond to client preferences and taste. The houses thus achieve the architects’ fundamental goal: when their clients enter their new house for the first time, they should feel as though they have always lived there.

This stunning visual presentation features new photography by noted interiors photographer William Waldron, who has captured the graciousness and generosity of the elegant interiors and welcoming porches and terraces that make these houses so inviting and timeless.

Praise for The New Shingled House

"Today's version of shingle style, as commonly practiced in East Coast summer enclaves, has produced many lovely houses but most are not Shingle Style at all. Stately, restrained, and symmetrical, they're more like Colonial Revivals in cedar-shingle clothing. So It's refreshing to see a house like the one architect Joel Barkley designed in Southampton. In creating the beach retreat, Barkley paid authentic homage to the asymmetrical lines and inventive quirks that, in addition to those little square of cedar, are Shingle Style's hallmarks."
—Architectural Digest

"In their second book, The New Shingled House—featuring homes from Martha’s Vineyard and the Hamptons to Northern and Southern California—partners John Ike, Thomas A. Kligerman and Joel Barkley showcase one of the defining styles of their practice. A marriage of modernist versatility and traditional materials, the new shingled style reasserts the iconoclasm of an architecture that, now often watered-down, was once highly progressive."
—San Francisco Cottages & Gardens

"In this dreamy coffee table book, the distinguished design firm of Ike Kligerman Barkley shares 14 of its most stately and iconic homes built in the classic American shingle style. From a lodge in the Blue Ridge Mountains to a beachy stunner in the Hamptons, these houses offer up aspirational eye-candy of the best kind."
—Lonny