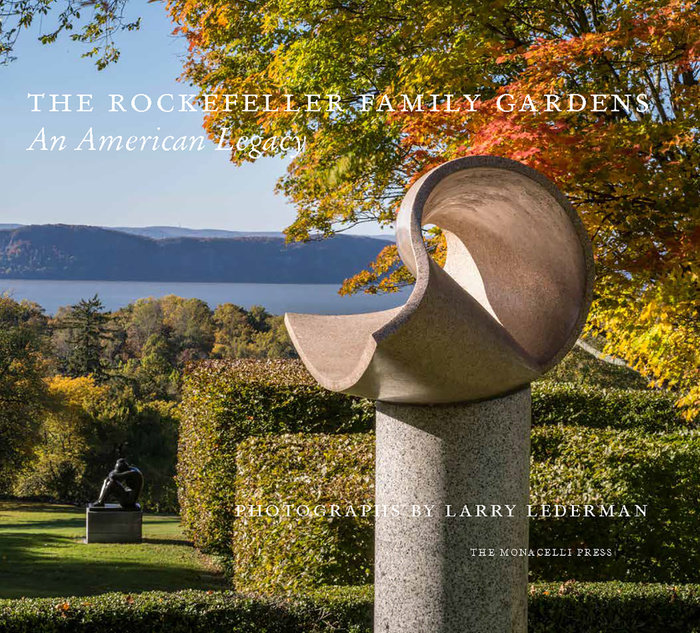 Larry Lederman takes readers on a privileged photographic tour through the Rockefeller family gardens in the Hudson Valley and Maine.

The Rockefeller family is synonymous with great wealth, extraordinary philanthropy, and exceptional stewardship of unspoiled landscapes. In their private world, the Rockefellers have created extraordinary gardens. Over the course of a century, their grounds have matured and evolved to reflect the layered visions of three generations of the Rockefeller family. At Kykuit in the Hudson Valley, John D. Rockefeller valued broad expanses of lawns with a noble forest of evergreens at the perimeter. His son—John D. Rockefeller Jr.—molded this landscape into a more formal Beaux-Arts garden design. This garden was later enhanced by Nelson A. Rockefeller’s addition of an extensive collection of twentieth-century sculpture, which is still in place today.

In The Rockefeller Family Gardens, photographer Larry Lederman gives readers unprecedented access to the two Kykuit gardens—the expansive Beaux-Arts–style garden and a little-known Japanese garden, brought to life by Governor Nelson A. Rockefeller. This book also takes readers inside the garden at Eyrie, the family summer retreat in Seal Harbor, Maine. There, Abby Aldrich Rockefeller collaborated with noted designer Beatrix Farrand to design a walled garden inspired by Asian aesthetics at the perimeter and filled with traditional perennials.

Lederman’s photographs capture the beauty of these gardens in all seasons, focusing on the geometry of the designs and the color and light that animates them. This tour through the spaces is accompanied by text from Todd Forrest of the New York Botanical Garden, Cassie Banning of the Abby Aldrich Rockefeller Garden, and Cynthia Bronson Altman of Kykuit to provide commentary on the design and plant materials featured in this captivating collection of photos.

Praise for The Rockefeller Family Gardens

"The Rockefeller Family Gardens: An American Legacy, with lush photographs by Larry Lederman, captures how gloriously each generation expressed its personal character on a monumental canvas."
—The New York Times

"The new book features the photographs of Larry Lederman, a man apparently undeterred by inhospitable weather conditions, who seems to have discovered every tiny nook and cranny of the place. He shows us Rockefeller’s creation over a period of years in all seasons and in all kinds of light. We see it early in the morning and at dusk, under gray skies and gleaming in the sun, bursting into bloom in spring, blazing with hot fall color and serenely quiet after a snow fall."
—Gardenista

"We may not care to admit it, but the gardens of the rich and famous hold a special allure for most of us. Now, thanks to photographer Larry Lederman’s discerning eye, we get a whole-book look at two gardens belonging to the Rockefeller family—both designed in the early 20th century and both of great historical interest.... We should be grateful for Lederman’s patience: It means we can now experience each garden in its full glory."
—1st Dibs

"What Lederman's photographs of the gardens at Kykuit and Eyrie display is a fascinating study of one family's sustained devotion to place, manifested in each generation's evolving philosophy and approach to space."
—Flower magazine

"In sumptuous photographs, this book documents the progress of the seasons through two gardens: Kykuit (Dutch for ‘look-out’), perched high above the Hudson River in the countryside near New York, and Eyrie, the garden in Maine of Abby Aldrich Rockefeller, John D.’s art-collecting daughter-in-law and the driving force behind MOMA in New York... The short essays are strong on historical detail, sparking interest in further research. But the meat of this book lies in Lederman’s splendid images."
—Historic Garden Review