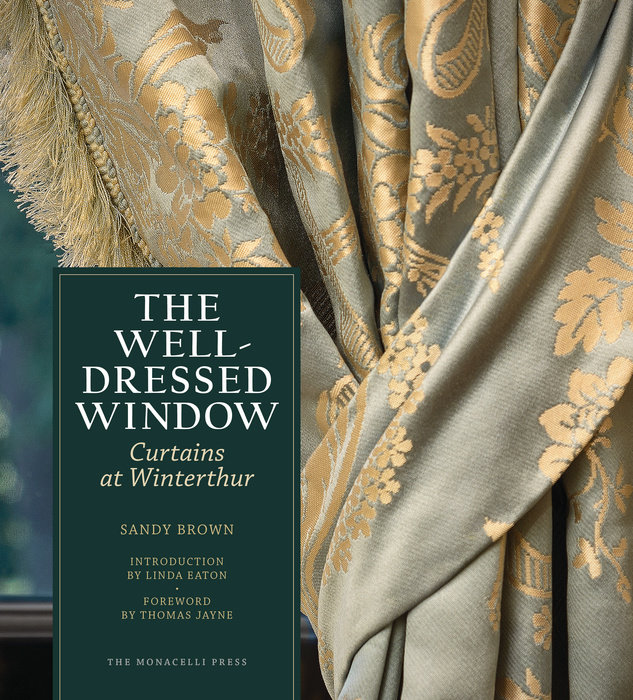 Sandy Brown is principal designer for Winterthur Design Associates, the museum’s interior design firm, which was founded in 1986. She holds a master’s degree in interior architecture and design from Drexel University in Philadelphia.

Linda Eaton is Director of Collections and Senior Curator of Textiles at Winterthur and the author of Printed Textiles: British and American Cottons and Linens, 1700–1850. A graduate of the University of Newcastle-upon-Tyne and the Courtauld Institute of Art, she teaches in the Winterthur Program in American Material Culture and lectures on textiles and textile conservation.

Thomas Jayne, founder of Jayne Design Studio and a member of both the AD100 and the Elle Decor A List, studied American material culture and decorative arts at Winterthur. He is the author of The Finest Rooms in America and American Decoration.

The Well-Dressed Window: Curtains at Winterthur is a unique compendium of design and textile history and an invaluable resource for designers and homeowners alike.

Today Henry Francis du Pont, the force behind the transformation of Winterthur from a family house to the premier museum of American decorative arts, is recognized, along with Henry Davis Sleeper and Elsie de Wolfe, as one of the early leaders of interior design in this country.

Working with architects, curators, and antiques dealers, du Pont created some 175 room settings within the house. He assembled his rooms using architectural elements from historic houses along the East Coast and filled them with an extraordinary collection of American furniture and decorative arts. Du Pont’s unique talent was his ability to arrange historically related objects in a beautiful way, in settings that enhanced their shape and form through the choice of color, textiles, and style.

Du Pont paid particular attention to the design of the curtains, and The Well-Dressed Window surveys his achievement, explaining how the fabrics were selected as well as their relationship to the architecture and other decorative elements in the rooms. Forty rooms are presented, each specially photographed to show the overall space in addition to details of fabric and trim. A series of stereoviews taken in the 1930s as well as other period photographs reveal the evolution of the window treatments and upholstery over nearly sixty years. Of particular interest is du Pont’s seasonal changing of the curtains, which were rotated throughout the year as the lighting and colors in the surrounding garden shifted.