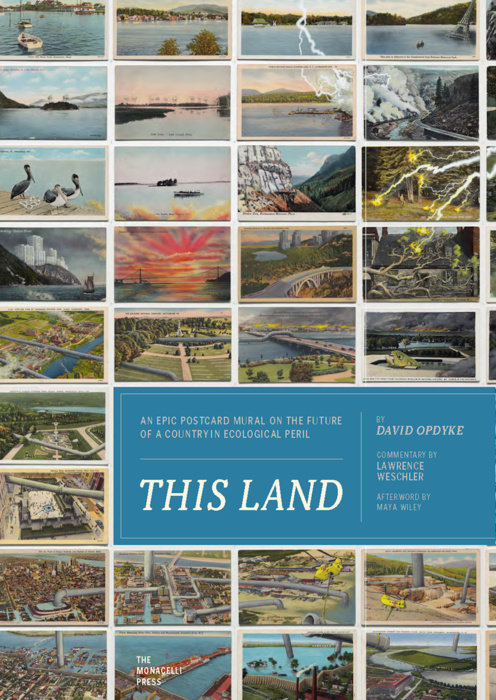 David Opdyke is an artist known for his trenchant political send-ups of American culture. Opdyke's political awakening in the early 2000s led to a body of work that confronted the horror of 9/11 and America's subsequent wars. His hyperrealistic topographical models of American suburbs comment on mall culture and suburban sprawl, while his sculptures of ruined monuments mock imperialistic hubris. His work is held in the collections of MoMA, the Washington Convention Center in DC, and the Brooklyn Museum.
Lawrence Weschler is author of more twenty books of narrative nonfiction, most recently And How Are You, Dr. Sacks? (FSG, 2019). He is a former staff writer at the New Yorker, and served as director of the New York Institute for the Humanities at NYU (2001-14), and artistic director of the Chicago Humanities Festival (2006-11). His books include Seeing is Forgetting the Name of the Thing One Sees; Mr. Wilson's Cabinet of Wonder (a finalist for the Pulitzer Prize); Everything That Rises: A Book of Convergences (winner of the National Book Critics Circle Award for Criticism, 2007); and A Miracle, A Universe: Settling Accounts with Torturers.
Maya Wiley is a Professor of Public & Urban Policy at the New School University and an NBC News and MSNBC Legal Analyst. Before the New School, Ms. Wiley, a civil rights attorney, was Counsel to New York City Mayor Bill de Blasio. In October 2020, Wiley announced her own candidacy to succeed de Blasio as mayor of New York.

David Opdyke’s massive collage This Land (as elucidated in this book by award-winning author Lawrence Weschler) presents a slow-burning satire of the American Dream as it blunders into the reality of climate change.

This Land is an epic mural fashioned by New York artist David Opdyke out of vintage American postcards which he then treated with disconcerting painted interventions. What at first reads as a panoramic birdʼs-eye view of an idyllic alpine valley reveals itself, upon closer examination, to be an array of connected scenes and vignettes. Across more than five hundred postcards, each one portraying a distinct slice of idealized Americana (town squares, mountain highways, main streets and county seats), Opdykeʼs acerbic, emotionally jarring alterations gradually become evident.

In this prophetic refashioning, forests are aflame, tornadoes torque from one card into the next, a steamboat gets swallowed up whole by some sort of new megafauna, frogs fall like Biblical hail from the sky. The human responses form a cacophony of desires and demands, panic and denial. Biplanes trail banners urging Repent Now!, others insist Legislative Action Would Be Premature, while still others advertise seats on an actual Ark.

The book This Land affords readers a closer and closer viewing of Opdyke’s devastatingly sardonic take on our impending ecological future, one in turn enlivened by Lawrence Weschlerʼs vividly sly blend of artist profile and critical interpretation. Featuring introductory essays providing background on the artist and the project as a whole, This Land also divides the sprawling mural into eight sections to allow for a more intimate viewing. Interspersed among the detailed visual sections are insightful thematic essays by Lawrence Weschler and an afterword that serves as a stirring call to action by civil rights attorney Maya Wiley. Additionally, the book’s jacket is printed on both sides, folding out to reveal the work in its full grandeur.

Praise for This Land

"This is among the most remarkable art projects that the climate era has produced—an epic work that bears endless seeing, and endless thinking."
—Bill McKibben, author of Falter: Has the Human Game Begun to Play Itself Out?

"David Opdyke’s mural, paired with Lawrence Weschler’s lively commentary, is a masterclass in looking closely at the climate crisis—in all its absurdity and horror, its complexities and transformative potential. A stunning work."
—Naomi Klein, author of On Fire: The Burning Case for the Green New Deal

"David Opdyke’s mural is mind-blowing in the scale of its sustained and obsessive concentration. It is, in fact, so perfectly realized and beautifully executed that, while the subject Opdyke confronts might necessarily bring one down, somehow you emerge from engaging his artwork with an elevated feeling."
—Eric Fischl, artist and educator

"This Land is a startling showcase for two far-seeing artists. David Opdyke’s postcard mosaic is a wonderment and a warning, an operatic conjuring of a ravaged planet. From Opdyke’s vision of environmental collapse, Lawrence Weschler weaves his own penetrating tale. Weschler’s essay stirs together history, art, and pop culture in a series of epiphanies that detonate in a piercing call to action."
—Lauren Redniss, author of Thunder & Lightning: Weather Past, Present, Future and Oak Flat: A Fight for Sacred Land in the American West

“The physical book is wrapped in a smart dust jacket that unfolds to present the reader a complete reproduction of Opdyke’s withering, terrifying—and yes—even humorous work.”
—Brooklyn Rail

"This book is perfect for your friend who jokes about the world ending soon [and] gives you a tactile way to see [David Opdyke’s] magnum opus. . . . It’s so well-conceived and, sadly, imaginable.”
—Brooklyn Based