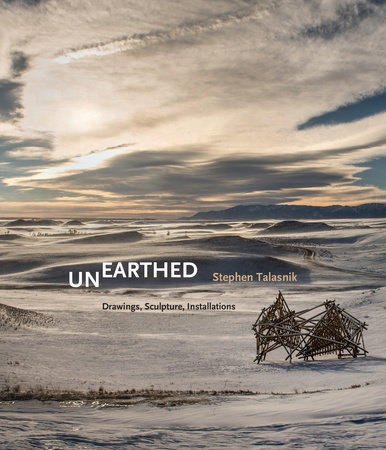 Stephen Talasnik is a graduate of Rhode Island School of Design (BFA) and the Tyler School of Art (Rome and Philadelphia, MFA). He served as exhibitions coordinator at the Fleisher Art Memorial in Philadelphia for six years, after which he moved to Tokyo to teach art and art history. For years he traveled extensively in Asia, studying vernacular engineering using natural materials. He expanded his practice into sculpture in the early 2000s, and has created installations for the Japan Society, Storm King Art Center, and as one of the primary artists with works at Tippet Rise Art Center in Montana. His work is included in the collections of the Metropolitan Museum of Art, the National Gallery of Art, the Albertina, the Whitney Museum of American Art, the British Museum, and the Centre Pompidou. He lives and works in New York City.
Lebbeus Woods (1940-2012) was a visionary architect, artist, and instructor. Phyllis Tuchman is a critic who has published in top art publications for over fifty years. David Wittenberg is an associate professor at the University of Iowa and the author of Time Travel. Michael Sorkin is an architect and author of numerous books of criticism, including All Over the Map and Twenty Minutes in Manhattan.

Stephen Talasnik’s intricate and mesmerizing work bridges the disciplines of art and architecture in this debut monograph.

A polymath whose work encompasses sculpture, drawing, and architectural land art, Stephen Talasnik manifests an elaborate and evocative aesthetic vision. Inspired by visionary artists and architects such as Leonardo da Vinci, Giovanni Piranesi, Gustav Eiffel, Antoni Gaudí, and Buckminster Fuller, Talasnik presents a fantastical world that looks as archaeological as it does futuristic.

Unearthed presents a broad spectrum of Talasnik’s work spanning the last decade, starting with floating sculptures commissioned by the Denver Botanic Garden, continuing on through projects at Storm King Art Center and Russel Wright Design Center, and culminating with a 30-foot-high timber sculpture at the new, highly lauded Tippet Rise Art Center in Montana. The publication of Unearthed coincides with the first exhibition at Tippet Rise devoted to a single artist. Numerous examples of Talasnik’s drawings are also included, as well as smaller-scale indoor and outdoor sculptures in diverse materials.

Several key contributors help interpret diverse angles of Talasnik’s practice, including renowned art critic Phyllis Tuchman, architect and critic Michael Sorkin, theorist David Wittenberg, and the late architect Lebbeus Woods, a close friend to Talasnik. Through these essays and hundreds of reproductions of Talasnik’s spellbinding work, Unearthed presents the extraordinary visions of an artist on the cusp of broad recognition.

Stephen Talasnik's work rewards the attentive viewer, for the sculpture has a quietly commanding power and the graphics exhibit exquisite virtuosity. Spare in his vocabulary, Talasnik is, nonetheless, dramatic in his ambitions.
—Mark Rosenthal, independent curator


The beauty of Stephen Talasnik's work is in its play of scale. A tabletop sculpture or drawing can appear as intricate as the universe, while an outdoor installation can slither or bloom with the simplicity of nature. This book shows you the ways and whys of these absorbing effects without reducing their mystery, whetting the appetite to experience his architectural creations in person.
—Alexandra Lange, author of The Design of Childhood


Whenever Stephen Talasnik and I walk down city streets or forest paths together, I am always fascinated to see what captures his attention—the complex web of scaffolding surrounding the dome of City Center in New York, the scrim of fabric obscuring the face of a building in Tokyo, the variable repetition in oak leaves on a single tree. Unearthed captures Stephen's vision and work with stunning photographs and thoughtful critiques, allowing all of us to experience the beauty and mystery of his art.
—Julie Burstein, author of Spark: How Creativity Works

Talasnik’s remarkable variety of mark-making and gradations of black and gray tones in graphite and charcoal imbue his drawings with an extraordinary life force – alternately evocative of micro-organisms or vast cosmic entities.  The visceral sense of growth and movement that pulsates through his drawings echoes the dynamic relationships between his complex three-dimensional constructions and their environments which often produce cast shadows, reflections, and other unexpected interactions.
—Shelley Langdale, The Park Family Associate Curator of Prints and Drawings

On my first visit to his studio, I was captivated by the fluid motion and movement in Stephen’s work, and the almost impossible nature of their manifestation in the real world. Our collaboration on Satellite #5: Pioneer is a wonderful exploration of the art of engineering, and the engineering of art. Moreover, the realization is an exploration of space and non-space, building and non-building, which changes constantly with your visual point of view.
–Raj Patel, Fellow, Arup

I have long admired Stephen Talasnik’s imaginative work. It is a treat to see so much of it pictured and described in such an outstanding book as Unearthed.
–Henry Petroski, author of To Engineer Is Human